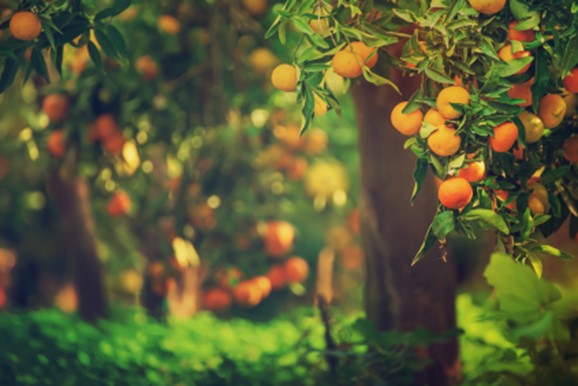 – The Fed is on a ride to a destination that does not exist, along with many stock investors.

– The vital role of “alternative investments” in portfolio construction and the coming “trade of the decade”.

– True wealth is created by eating only from the fruit of the tree, leaving the orchard alone.

In one of my favorite episodes of Seinfeld, “The Wizard,” George Costanza was trying to get out of an event to which he was invited by the parents of his ex-fiancé, the Rosses. Not wanting to go, George says he can’t attend since he’s going to his house in the Hamptons. Of course, George doesn’t have a house in the Hamptons.

Unbeknownst to George, his friend Elaine also speaks to the parents in a separate conversation. George and Elaine talk shortly after their encounters.

George: So, I ran into the Rosses again.

Elaine: Oh, right at the coffee shop. Where did they get the idea that you have a place in the Hamptons?

George: From me! I told them I have a place in the Hamptons. What did you say?

George: So, they know. Those liars.

Elaine: But, you lied first.

George: But, they let me go on and on. They never said a thing. You don’t let somebody lie when you know. You call them a liar.

George: Yes! Thank you! Was that so hard?

To force the Rosses into acknowledging he was lying, George invites them to his Hamptons house. Surprisingly, the Rosses accept his invitation. As they get into the car to drive to his imaginary house, George gives the Rosses one last chance.

During their drive, George goes over some of the details of his house, explaining it has two solariums and even two horses—Snoopy and prickly Pete. The Rosses play along and ask George to pull over so they can buy a housewarming gift.

Fed Chairman Powell and many stock investors are currently on a similar drive to a destination that does not exist. Chairman Powell professes that higher rates and tightening financial conditions are possible after years of substantial debt growth.

Conditioned by 13 years of ultra-loose monetary policies that have involved near-zero interest rates and massive direct injections of liquidity, stock investors who are going along for the ride also believe the Fed can tighten without a major market dislocation. In effect, Chairman Powell and stock investors seem to believe at the end of their trip (tightening cycle), Powell’s legacy and stock investors’ capital will arrive safely at some sort of soft landing.

Stock investors who believe the worst is behind them are neglecting the extraordinary heights stock valuations and policy extremism reached during this current cycle.

In 1934, following an 89% market collapse during the Great Depression, Benjamin Graham and David Dodd detailed the beliefs that stock investors had adopted during the speculative runup to the 1929 peak. They are identical to what we’ve observed in recent years. First, “that the records of the past were proving an undependable guide to investment”; second, “that the rewards offered by the future had become irresistibly alluring”; and third, “a companion theory that common stocks represented the most profitable and therefore the most desirable media for long-term investment.”

Taken together, these beliefs ultimately contributed to “the notion that the desirability of a common stock was entirely independent of its price.” Surveying the rubble, Graham and Dodd observed, “The results of such a doctrine could not fail to be tragic.”

Encouraged by these same beliefs, stock investors drove S&P 500 valuations to levels even beyond the 1929 and 2000 extremes—As you can see in the chart below, stock market cycles that reach valuation metrics rarely seen typically do not end with a wimpy 20% decline from all-time highs.

Keep in mind that periods of hyper-valuation are not resolved in one fell swoop. The way that stock bubbles unfold—which this time could be between 50-70%—is through multiple periods of decline and even free-fall, punctuated by fast, furious “clearing rallies” that offer hope all the way down. These episodes typically unwind in waves, not in any single capitulation. The steeper the starting valuations, the more waves one typically observes. By the time stock investors experience the second or third free-fall—and we’ve hardly experienced the first one yet—the psychology of investors is not “this is the bottom” — but rather, “there is no bottom.”

End of cycle drawdowns tend to be commensurate with the excesses of the cycle, such as mortgage debt growth during the last bubble. When the housing bubble popped and the last cycle ended, the S&P 500 lost approximately 50% of its value. As you can see in the chart below, excesses of the current cycle—including government debt growth—have been even greater, and have created a similar risk of a meaningful stock market drawdown. 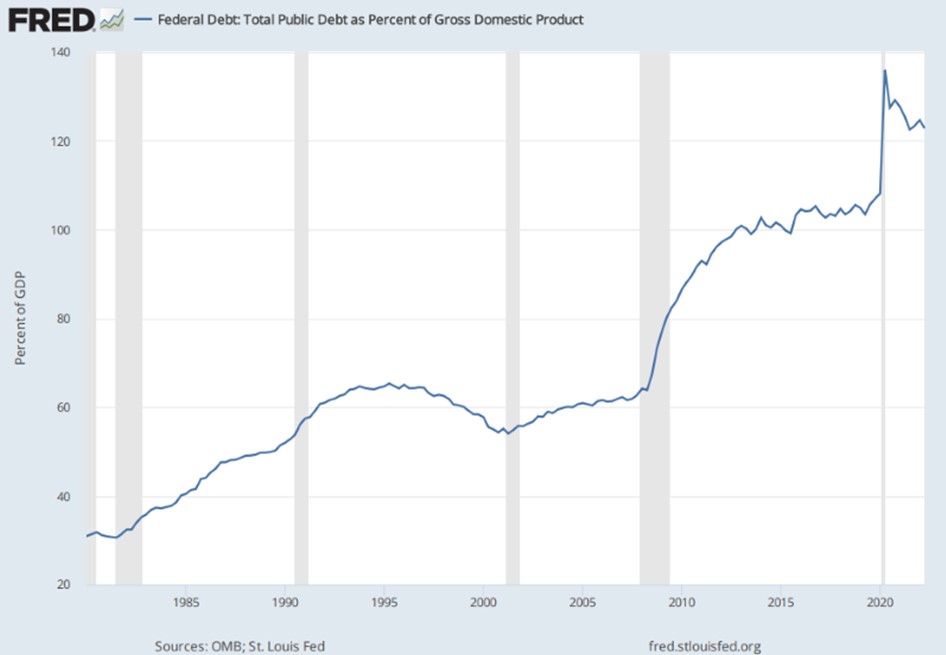 With the housing market now transiting abruptly from red-hot to frozen, we believe many businesses, investors, and policymakers will be caught off guard by how quickly economic trends shift. Recent reports from homebuilders show a sharp decline in orders, or future activity. Once the new reality sets in, we expect the sudden slowdown in businesses tied to housing will lead the way to lower consumer spending and corporate earnings.

The Vital Role of “Alternative Investments”

We continue to believe today that alternatives are warranted additional diversifiers—additional hedges (or safety nets)—that benefit diversified portfolios with non-correlated approaches to traditional, stock and bond indices and may further an investor’s accumulation or income needs.

In the stock crash that followed the tech bubble burst of 2000, many viewed alternatives (hedge funds, managed futures, real estate, commodities) as a diversifier to stock risk because it was stock risk that had just slapped their portfolio upside the head.

The next time a stock diversifier was needed to replace equity risk was during the housing bubble (late 2007 through early 2009.) While non-agency mortgage bonds got slaughtered during the financial crisis, Treasury bonds did exactly what we banked on—yields collapsed and prices increased, diversifying the pain of the stock crash.

This year, our large underweight to stocks and increased allocation to alternatives is diversifying away much of the pain of the stock crash. However, as you can see in the chart below, US Treasury bonds have yet to arrive home to deliver the diversifying benefits they have historically provided when things go really bad. In fact, they have inflicted most of the fluctuation pain across all portfolios this year. 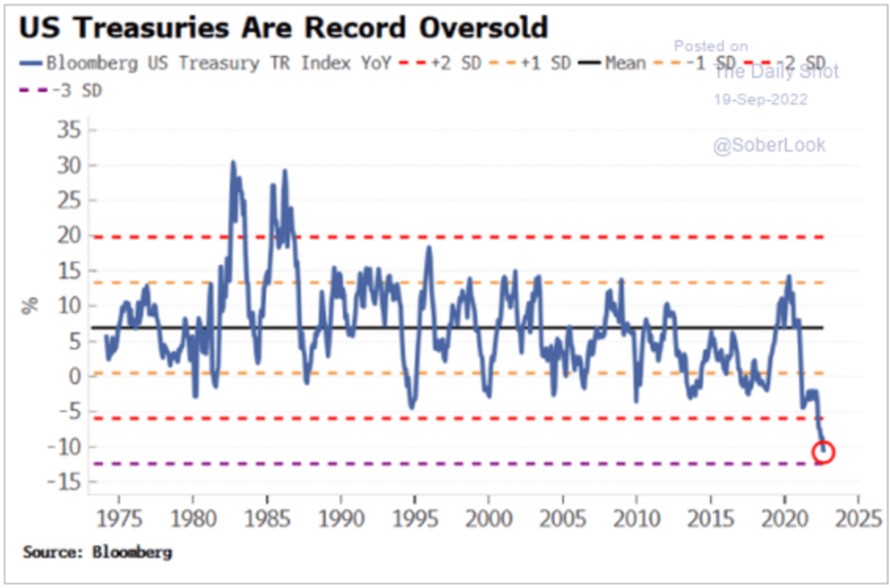 The Developing “Trade of the Decade”

We are sitting today on the precipice of a recession with the Fed raising rates. I believe Chairman Powell will talk inflation-fighting all he can, but deep down he is programmed to be an anti-deflation central banker who is keenly aware that our own federal government can’t service its $30 trillion debt at a 4-5% Fed funds rate.

Today, Treasuries are the most oversold in at least 50 years. In the months ahead, we believe a wave of bear market selling of stocks will likely see money flood into the only strategy that possesses the “flight to safety” benefit: Treasuries. This will push Treasury yields down and prices back up. You’ll also notice in the above chart that the steeper the draw-down in Treasuries, the higher the subsequent returns, and in a relatively short period of time, too.

From today’s low starting prices, expected returns of 20-30% would not be surprising. We believe this may be the “Trade of the Decade”.

George and the Rosses eventually make it to the end of Long Island. As they knew all along, there wasn’t a Hampton’s house.

Mr. Ross: This is the end of Long Island. Where’s your house?

George: We go on foot from here.

George: Then why? Why did you make me drive all the way out here? Why didn’t you say something? Why? Why? Why?

At the end of the current market cycle, we suspect investors won’t be too fond of the Federal Reserve either.

While the Fed has given investors what they’ve wanted for many years, we believe we are entering a period where the consequences of the Fed’s policy of unlimited money creation are finally arriving home to roost. Instead of a soft landing, we see an earnings recession and significant downside risk to real estate and stock prices.

We never believed the Fed could get out of the box it placed itself in after years of overly aggressive and intrusive monetary policy. Ultimately, we expect Chairman Powell will be forced to admit he doesn’t have a house in the Hamptons and will once again pull out the Fed’s worn-out playbook and abruptly shift policy. In effect, the Fed will have to admit that today’s higher interest rates are not compatible with current debt levels. The Fed cannot defy the laws of math, science, or economics. The result is an exacerbation of boom/bust cycles that the Fed has created. Lather, rinse, and repeat.

Eating from the Fruit of the Trees

Investors that are selling assets as they decline in price, as all withdrawers from stock and index portfolios must surely do, to provide income, will permanently deplete capital. Withdrawing only from the fruit of their trees (that is, taking the stable dividends and interest and leaving the capital alone that go up and down in price while generating dividends) will not.

If you’re currently reinvesting the dividends to buy additional trees (shares) which also produces fruit (dividends), you will find that the fluctuation of the market values we’ve experienced in your orchard (read portfolio) over the past 12 months is actually having a positive impact by increasing the yield (read expected annual income) from your crops by over 20% to meet your future income needs.

We have fined-tuned our portfolios with an emphasis on their ability to withstand adversity and bounce back from difficult economic and financial market events. While we expect the market values of your portfolio to fully recover in the months ahead, we also know that the true wealth that comes from investing is not in the liquidation values of the orchard, it’s in the yields of the fruit, which can be consumed from the orchard.

Past performance is not a guarantee or a reliable indicator of future results. All investments contain risk and may lose value. This material contains the current opinions of the author but not necessarily those of Plan Financial and such opinions are subject to change without notice. This material is distributed for informational purposes only. Forecasts, estimates, and certain information contained herein are based upon research and should not be considered as investment advice or a recommendation of any particular security, strategy or investment product. Information contained herein has been obtained from sources believed to be reliable, but not guaranteed. No part of this article may be reproduced in any form, or referred to in any other publication, without express written permission. Plan Financial is a trademark or a registered trademark of Plan Life & Wealth Management, Inc., in the United States. © 2022, Plan Financial.