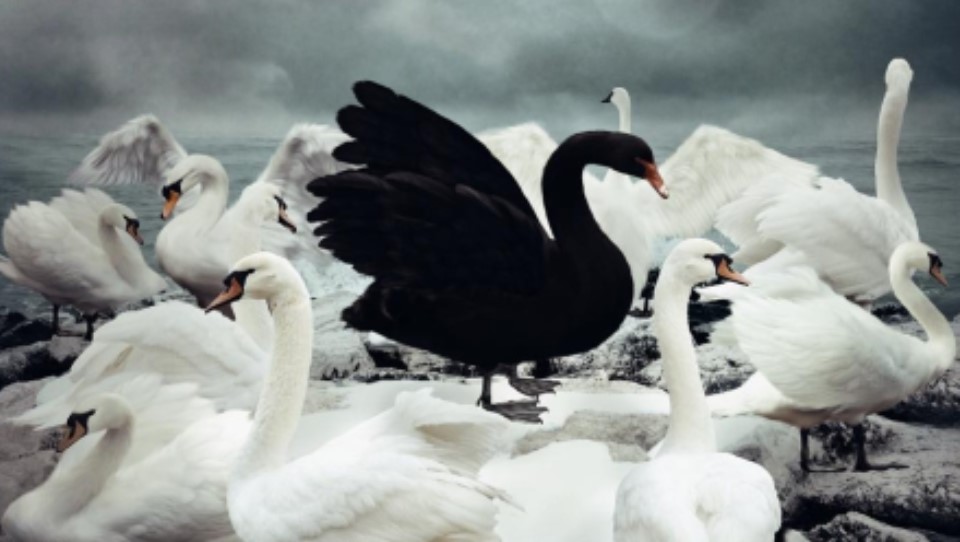 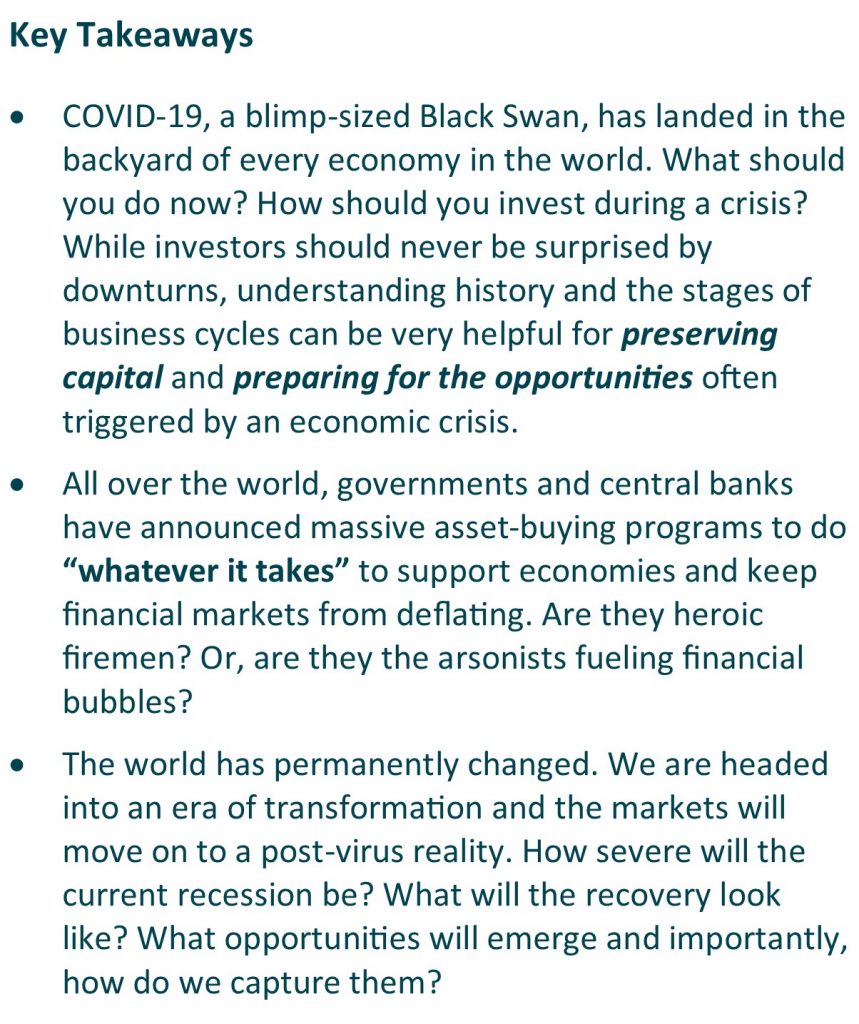 We recognize this is a challenging time for families and businesses and we don’t want to lose sight of the real human impact of this pandemic. The health and safety of all of you, our family and friends, our clients, colleagues, team members and our partners are first and foremost on our mind.

In last Fall’s Investment Insights, I suggested that truth always has a way of working its way out and could be found in the strangest places. It can also be found in one of the cutest places—in my 2-year old granddaughter, Charlotte. This past January, our family took Charlotte to see her first movie, Frozen II. Never would we have imagined that over the weeks and months that would follow, “Into the Unknown” would become a siren song that would be repeated and danced to endlessly by my little “Char-star” (as affectionally referred to by her “Papa-J”). I also would never have imagined that the global economy was about to go into its own deep freeze, and that it would become a siren call for governments and central banks do something—the enticing appeal of something alluring but potentially dangerous, but you don’t know what it is . . .

A continuing theme in the coronavirus era is how it’s exposing economic and financial market issues that were there prior to the pandemic. Unlike the virus, these are not natural phenomena. But, they will have natural consequences.

Stages of a Business Cycle

Business cycles are a well-understood concept commonly linked to developing innovations which often begins a new phase of investment and new opportunities in financial markets and employment. The outcome is economic growth and, as the innovation matures and markets become saturated, growth slows down. A phase of recession is then likely, as a correction is required to clear the excess investment or capacity that inevitably occurs in the later stages of an economic cycle.

In a normal 10-year business cycle, a business will have two great years, six good years, and two terrible years. The point is that you should never be surprised by a downturn—whether you’re a business owner or an individual investor—you must always be prepared for a hit to income or profits and have three to six months of dry powder (cash) saved up. Business cycles are a predictable known.

It’s extremely important to understand that recessions are a normal condition to a free market economy as they are regulating any excess and bankrupting the weakest players or, those with the highest levels of debt. Recessions are a predictable known.

“When the tide goes out, it reveals who has been swimming naked”  -Warren Buffet

For over 500 years of observable economic history, bubbles—financial manias—tend to be few and far between (Tulip Mania, South Sea Company, Mississippi Company, Tech bubble, etc.) But, the scale and amplitude of bubbles have accelerated over the past 20 years as governments and their central bankers fight a process (business cycles) that “naturally” occurs.

After the recession of 2001, the Federal Reserve (Fed) decreased interest rates and created policies that led to the dangerous territory of granting NINJA (“no income, no job, no asset verification”) mortgage loans, creating a moral hazard and a housing bubble that burst in 2007 and shortly thereafter, the start of the Great Recession.

Instead of allowing the market to adjust and get rid of the structural problems, the Fed then bought massive amounts of Mortgage-Backed Securities (MBS) to lower mortgage rates further and reflated a mortgage and real estate bubble. Promises in 2008 of normalizing monetary policy—such as reducing balance sheets and phasing out market intervention—have been proven to be lies. This interference—and the manias that fuel them—has created exaggerated phases of booms and busts.

Real estate wasn’t the only sector that the Fed was able to substantially inflate with its zero interest rate policy (ZIRP). While average U.S. economy-wide corporate profits have been flat since 2012, the corporate sector, as shown in Figure 1, has been the main buyer of equities since 2009 while at the same time, issuing corporate debt to fund corporate payouts to investors—including buybacks of their own company stock. 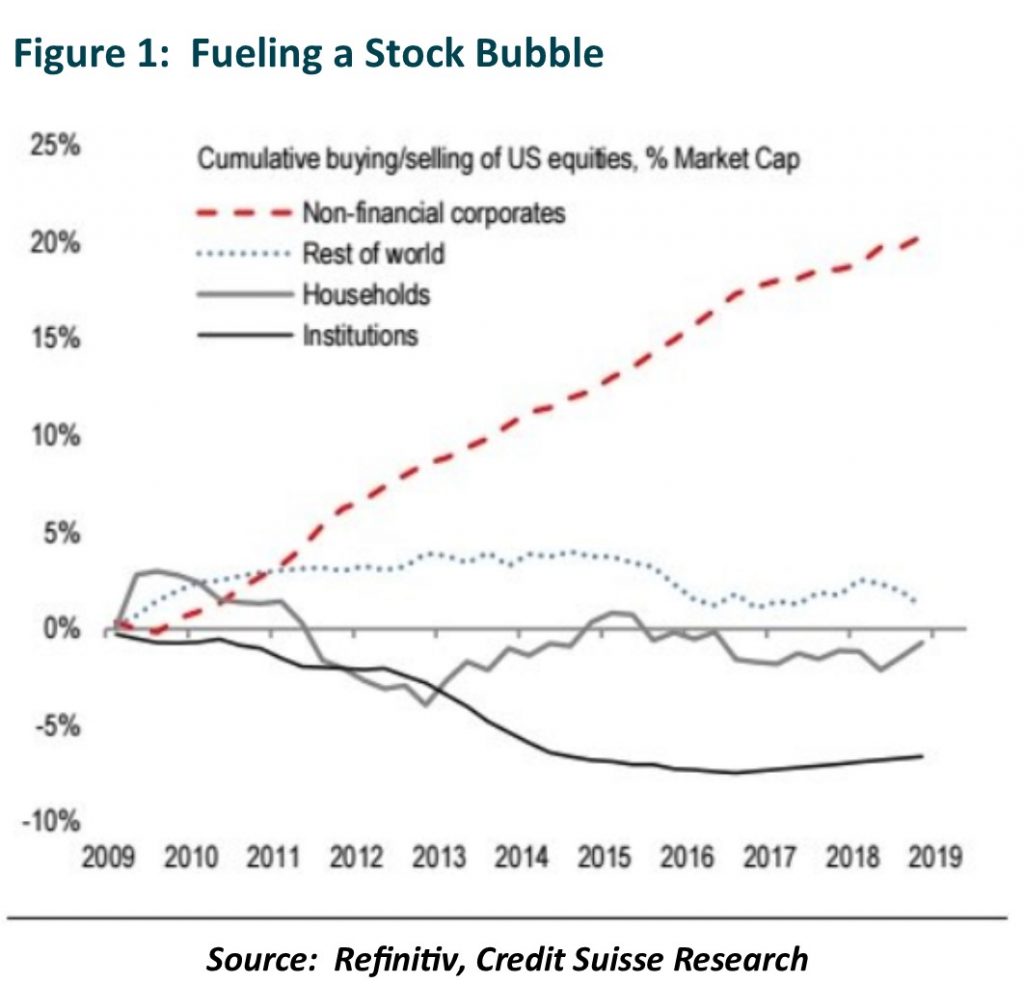 This financial engineering was common all over corporate America and has greatly contributed to the stock market’s rise over the last 10 years. What’s more, corporate debt has now increased by about 67 percent since the end of the Great Recession and the quality of this debt has been deteriorating. Nearly half of the $4 trillion that was added are BBB rated bonds, or the lowest ratings of investment-grade bonds. Many of these bonds were destined to fail long before the world ever heard of COVID-19. Instead of economic stability regulated by market forces, monetary intervention has created long-term instability for the sake of short-term stability.

As you can see from the chart in Figure 2, the Fed is now leading the charge to rescue sinking economies with its unlimited balance-sheet expansion as central banks around the world are buying up assets at a record pace. Morgan Stanley estimates the US Federal Reserve, European Central Bank (ECB), Bank of Japan (BOJ), and Bank of England (BOE) will expand their balance sheets by $6.8 trillion by the time the current COVID-19 crisis is over. The 2008 financial crisis looks like a blip on the radar compared to the coronavirus response. It’s clear that government debt and monetary policy will be the last hope in fueling the next recovery. The staggering amounts of money governments have already spent are not “stimulus” as it’s commonly understood. They are more like “life support.” They’re helping contain the damage, but they aren’t going to bring the economy back. That part hasn’t even started. While an even lower level of GDP growth (law of diminishing returns) is a predictable known that results from rising unproductive debt, at the expected levels of debt-to-GDP, the loss should be considerably larger, but no historical record exists to calibrate its magnitude. We’re going into the “known,” unknown! 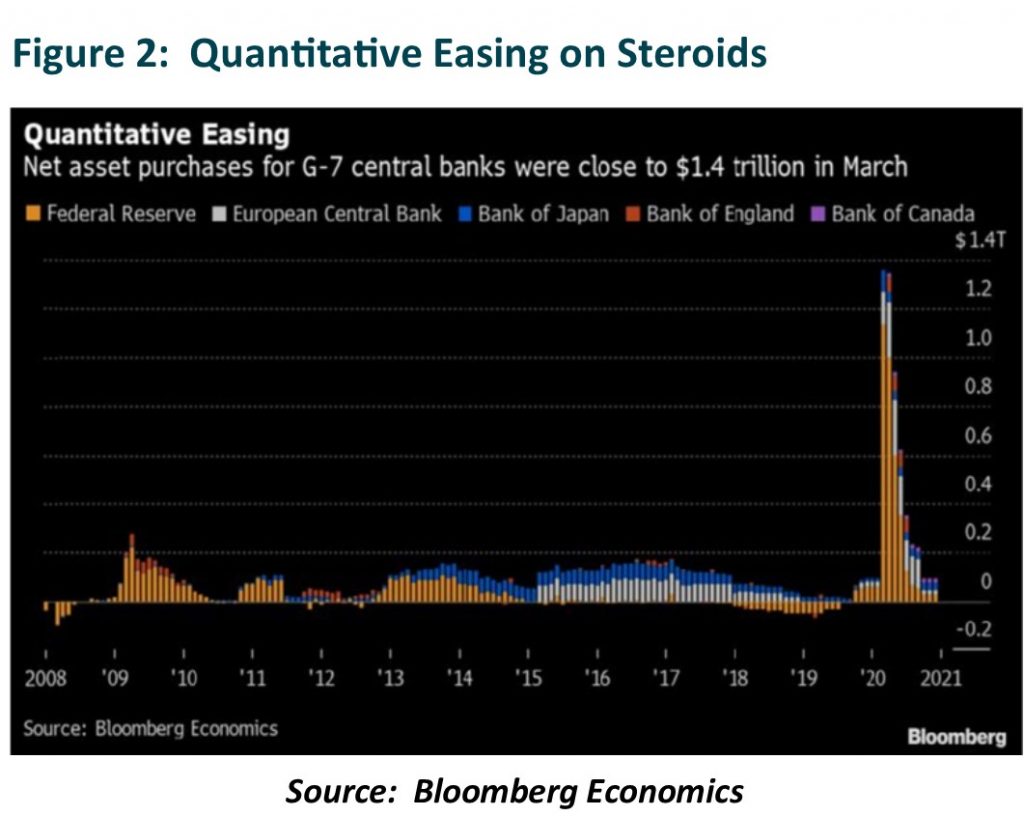 The question we all should be asking: Are the central bankers and their political masters really the heroic firemen, as often credited by mainstream financial press? Or, are they the arsonists, fueling massive financial bubbles?

Following the blow-off phase triggered by the landing of the COVID-19 black swan in mid-February, the current position of the market (as of May 26th) is reminiscent of the “return to normal” trap in John-Paul Rodrigue’s familiar chart shown below in Figure 3. Today, over 36 million Americans are out of work, businesses are closing, and gross domestic product (GDP) is forecast to contract at an annual rate near 40% in the 2nd quarter. Jobless claims are soaring, the unemployment rate is skyrocketing, and corporate earnings are depressing. Based on the current trends, this recession will be more severe than the three previous recessions of 1973-75, 1981-82 and 2008-09. In that context, it’s worth remembering that market lows associated with U.S. recessions have generally occurred at valuations that were 40% lower of those prevailing today. 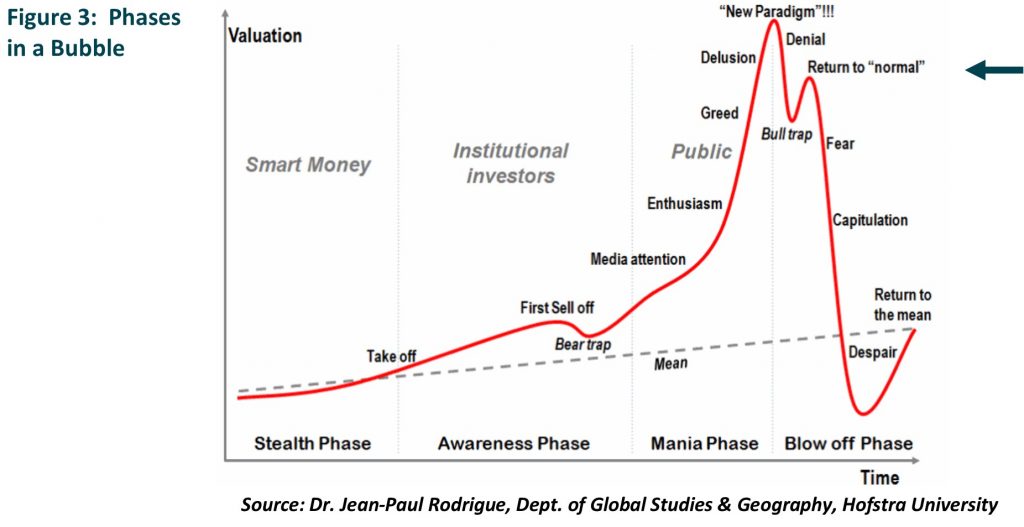 While stocks rallied nearly 13% in April as many financial institutions try to reassure the public that this is just a temporary setback, many investors will be fooled. Despite the extraordinary measures taken by the Federal Reserve and Congress to stop the panic selling, the economic reality has not changed and the equity market remains steeply overvalued. Large market bounces are common in bear markets as financial markets are always forward looking and are now focusing on life after COVID-19 when society, it is hoped, returns to normal. This is a dangerous place, and known as a “bull market trap,” as unbiased opinion about the fundamentals becomes increasingly difficult to find as many players are heavily invested in stocks and have every interest to keep inflated asset prices going. By believing the Fed will always support stock prices, investors have been taught the wrong lesson.

The re-education of many investors is likely to be painful as they find it impossible to resist taking one more bite at the apple.

We’ve seen this movie before during the dot-com bubble. As you can see in Figure 4, after the bubble burst in March 2000, the Nasdaq dropped 35% over the next two months. The index staged a 43% rally and recouped nearly half of the initial loss. It was encouraging for investors, but it turned out to be a classic “bull market trap.” Fairly unnoticed from the general public, the smart money, as well as many institutional investors, had already reduced their positions in overvalued holdings a long time ago (the same reasons we had shifted our portfolio strategies into more defensive positions in 2019, ahead of the COVID-19 outbreak). The Nasdaq ended up grinding 66% lower before bottoming nine months later and the late comers (commonly the general public) were left holding depreciating assets. At this point, the general public considered this sector as “the worst possible investment one can make.” This is the time when the stealth phase begins again, and the smart money starts acquiring assets at low prices.

Those who understand the new fundamentals realize an emerging opportunity for future appreciation. A disciplined approach becomes important as significant buying opportunities in undervalued holdings are created by the additional wave of bankruptcies, financial defaults and price dislocations. A supply shock and subsequent collapse of oil prices in April created an opportunity for us to add an energy sector position to our portfolio strategies, and at a price 45% lower than it was in January.

We also began averaging into gold positions, as an asset diversification hedge against inflation and market volatility. While we don’t expect inflation over the short-term, it’s a predictable known how central bankers will respond. As long as the public perceives that the government has the ability to meet its liabilities—or at least keep them from growing at a rate that’s not too different from the growth rate of the economy—economic weakness seems more likely to depress inflation and interest rates. When currency creation—for the purpose of financing government deficits—grows at such an excessive and unsustainable pace that the public loses confidence that there ever was a prospect for liabilities to be met through taxation, the inflationary consequences tend to be severe. This could increase the search for alternatives to Treasury bonds and currency and may already be adding to the upward pressure we’ve started to see in gold prices.

Soon, we will step out from behind our screens and our phones. We will look each other in the eye – instead of the camera. We will exchange hugs and handshakes. Until then, stay positive and stay healthy, both physically and financially.