– As often happens, well-intentioned plans by the Fed and other central banks have caused unintended side effects.

– Markets have mistakenly extrapolated the current high inflation rate into the future.

One of the most important concepts in the sphere of finance and economics was set forth more than one hundred years ago by the great French economist, Frederic Bastiat, in his classic essay, “That Which is Seen, and That Which is Not Seen.” Bastiat urged his readers to consider the broad consequences of any economic act, for it engenders not just one effect, but a series of effects. Of these effects, only the first is immediate; it is revealed simultaneously with its cause—it is seen. The other effects unfold in succession—they are not seen. It is well for us, if they are foreseen.

One of the most popular examples of this is probably “The Cobra Effect:”

“The British government, concerned about the number of venomous cobras in Delhi, offered a bounty for every dead cobra. Initially, this was a successful strategy; large numbers of snakes were killed for the reward. Eventually, however, enterprising people began to breed cobras for the income.”

Certainly, a well-intentioned act that backfired and reversed the intended effect!

Between a good and a bad economist (and investor, too) this constitutes the whole difference—the one takes account of the visible effect; the other takes account both of the effects which are seen and also of those which must be foreseen.

For over a decade, post-2008 monetary policy by the Federal Reserve and central banks around the world have distorted the financial markets with low or near-zero interest rates.

In his bestselling book Economics in One Lesson (1946), The American journalist Henry Hazlitt elaborated that:

“…easy money creates economic distortions . . . It tends to encourage highly speculative ventures that cannot continue except under the artificial conditions that have given birth to them.” At the same time, wrote Hazlitt, “… the artificial reduction of interest rates discourages normal thrift, saving, and investment. It reduces the accumulation of capital.”

To offset the economic consequences of the pandemic, the Treasury worked hand in glove with the Fed over the past couple of years to shift trillions of newly created dollars into the bank accounts of individuals and corporations. While some of that has been kept within the banking system, a lot of it clearly has entered the “real economy” through stimulus payments, unemployment insurance, and federal deficit spending.

This is yet another way in which well-intentioned acts have caused unintended side effects and even greater levels of confusion. We call this the “Fed Shift.” We are witnessing the shift of spending of one kind to spending of another. For example, when COVID hit, private sector spending collapsed and government spending increased sharply to compensate. Additionally, household spending on goods, rather than services (due to COVID lockdowns) exploded. Now, this is all reversing, with the government tightening financial conditions as the private sector takes over, supported by household expenditure of huge savings accumulated during the COVID crisis. These savings are now rapidly being depleted. Could the depletion of this excess savings push the economy into recession? Depending how much and how fast the Fed goes, a mild recession is likely, as spending growth due to increased workforce participation will help offset this.

While some fear that higher interest rates alone could derail GDP growth, there are two reasons why this will likely not happen:

Additionally, while Fed officials will not say so up front, they know that today’s high inflation will not be cured by hiking rates so far as to cause a recession. For the causes of today’s inflation are not in its control, and are primarily due to a multitude of COVID-related shortages.

What Will It Take To Drive Down Inflation?  Not Much!

Our view is that today’s inflation will fall back down to 3% once shortages stop getting worse. A 3% post-crisis U.S. inflation rate will be higher than the pre-COVID rate, primarily due to new wage pressures, partly reflected by adverse demographic developments (read Baby Boomer retirements) and partly a shifting in the balance between returns to capital and labor that is now beginning. Labor’s share of national income will rise, at the expense of excess returns to capital which will fall. It’s important to remember that these “structural” developments in the labor market are completely independent of the COVID and Russian crises.

Could inflation drop back down to 3% even if food and energy prices remain high? Yes. Inflation by definition is the rate at which prices rise or fall.

Because of this reality, all that is required to drive down inflation is for prices to stop rising. As simple as it is, the point we are making here is not well understood at all. We expect that there will be no further increases in most prices by the end of the current year.

The Animal Spirits are Disappearing

In 1982, I graduated from Fresno State and began my career in the financial services industry. That was also the same year when inflation and interest rates began falling . . . for the next forty years, until 2021. Both the 10-year Treasury bond yields and inflation fell from 15% to 1.5%, and the S&P index exploded to nearly 5,000 from 141 in 1982. But more was going on to drive the market upward than just falling inflation and interest rates.

This long-term bull market is now over and there are two main reasons why. First, interest rates will not fall much further. Second, earnings per share will grow at a lesser rate as today’s balance between the share of national income going to capital versus labor is shifted due to the reasons we discussed earlier.

The resulting decline in the earnings per share growth rate will shock the stock markets. Over the past few decades, investors have become used to positive rather than negative earnings surprises. But today, negative shocks are already starting to make the news.

The “math” piece involves valuation methods that link prices, estimated future earnings, and long-term expected returns. For any given set of expected earnings:

The chart below shows the higher the market (blue line) is above its valuation norms (green line), the worse the likely subsequent market returns. In contrast, market advances tend to be durable when they begin from undervalued levels and move upward toward valuation norms. The “stairstep” (red line) shows levels of the S&P 500 that were not breached at any point in the future. 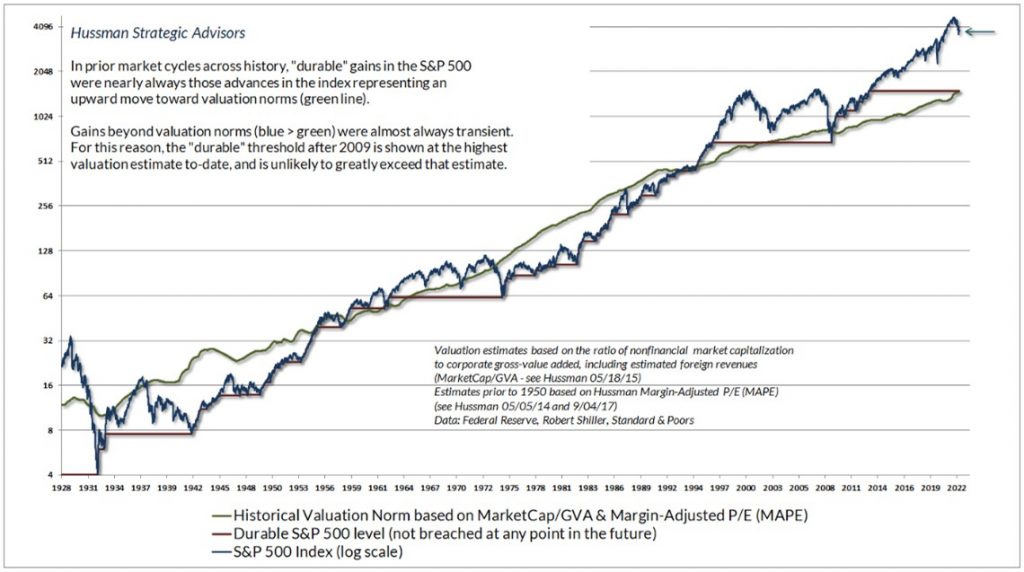 Short- and intermediate-term returns are driven by psychology and behavior will be heavily affected by shifts between unbridled speculation and risk-aversion. Stock prices can continue to advance in the face of extreme valuations, provided investors have a speculative bit in their teeth. This was the only way the market was able to reach the bubble valuations of 1929, 2000, and what was likely the bubble peak in January. Extreme valuations can matter suddenly, and with a vengeance, once investor psychology shifts toward risk-aversion. 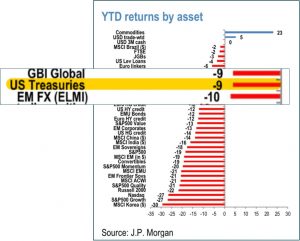 As you know, 2022 has been a challenging environment for investors so far across the board, with negative returns for pretty much every single asset class outside of commodities this year. As you can see from the chart to the left, even US Treasuries (considered the world’s safest asset class) are down 9%.

That’s the common thread: low interest rates created a distorted market and the Fed is now tightening (raising) interest rates into what is an already unfolding slowdown which is ending in risk-aversion. The animal spirits that have long let the technology and energy industries deliver innovative, cost-effective products are disappearing. Well, maybe not disappearing, but definitely going into hibernation.

These periods of volatility oftentimes create compelling investment opportunities, and we’re already starting to see some of that. Over the past 35 years, as shown in the chart below, long-dated Treasuries have averaged a return of 12% during periods of 20% or larger declines in the S&P 500, which it has already surpassed.

By being substantially underweighted stock positions coming into this year and an overweight to commodities, energy and alternative sectors, we’ve been able to minimize portfolio volatility and, even more importantly, the rising yields create the opportunity to provide retirees the ability to distribute a safe withdrawal rate up to 4-5%. While portfolio values will fluctuate (both up and down), the single best strategy to help assure investors never run out of money during their retirement, is to provide distributions from a portfolio structure that generates a reasonable level of stable income (interest and dividends), without having to sell the underlying fund positions.

While speculation can certainly create the temporary illusion of prosperity, the wealth is in the deliverable cash flows. While stock market valuations remain near the highest level in history, matched only by the 1929 and 2000 extremes, the market psychology continues to convey risk-aversion among investors. Alternating periods of speculation and risk-aversion will likely provide regular opportunities—to embrace market risk when a material retreat in valuations is joined by investor sentiment of risk-aversion, and to continue to provide safety nets when rich valuations are joined by unbridled speculation. For our part, we’ll respond to measurable valuations, market psychology, and other conditions as they shift over time!

Past performance is not a guarantee or a reliable indicator of future results. All investments contain risk and may lose value. This material contains the current opinions of the author but not necessarily those of Plan Financial and such opinions are subject to change without notice. This material is distributed for informational purposes only. Forecasts, estimates, and certain information contained herein are based upon research and should not be considered as investment advice or a recommendation of any particular security, strategy or investment product. Information contained herein has been obtained from sources believed to be reliable, but not guaranteed. No part of this article may be reproduced in any form, or referred to in any other publication, without express written permission. Plan Financial is a trademark or a registered trademark of Plan Life & Wealth Management, Inc., in the United States. © 2022, Plan Financial.