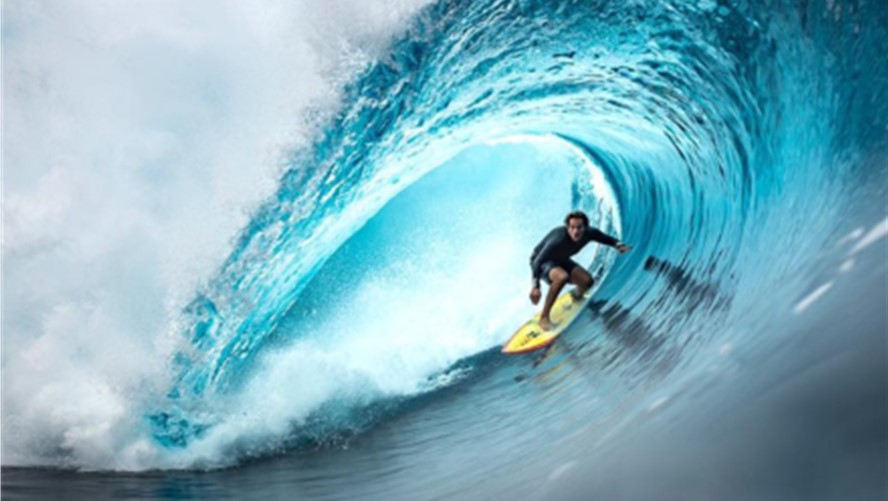 While in my early 20s, I spent many summers driving the California coastline in my ’66 Mustang, competing in regional weekend windsurfing contests during the day, and enjoying the good “vibes” of the Myer’s Rum sponsored dinner parties thru the night. After competing in my last race at the 1986 Windsurfer World Championships at the age of 26 in Praia do Forte, Brazil, and after having ridden many large waves over the years and thinking those days were far in my rear view mirror, never would I have imagined that the largest waves I would ride, were still ahead—some 34 years later, an extreme wave of events that will likely be remembered simply as, 2020.

For the first time in months, COVID-19 took a back seat as the U.S. elections took center stage in November. The overall result of the 2020 election, while leading to a Democratic president, did show the Republicans gaining a number of seats in the House. The 50-50 split in the Senate might even jump-start a new cycle of cooperation that would prove a potent antidote to the January 6th debacle, a scene in the U.S. Capitol that none of us will soon forget. The incoming Senate has an opportunity to take the lead in restoring a shared national purpose, and we hold out hope they can bridge—through more productive means—divisions within the U.S. populaces that run very deep. The budget reconciliation process allows entitlement spending and revenue provisions to be passed with 51 votes. Beyond that exception, bills must be approved by 60 senators to end a filibuster, allowing a minority of senators to stop legislation. There was no “mandate” for a very liberal agenda, and this will likely moderate policy ahead of the 2022 mid-terms:

The initial rounds of pandemic survival payments, passed last spring, were unprecedented in their size and scale. As support programs for the unemployed and small businesses expired, the stress placed on individuals and the economy as a whole increased. This reduced economic momentum in the final months of 2020. With the latest wave of COVID-19 cases rising, a bipartisan group of lawmakers worked to craft the $900 billion package that was ratified just before year-end and included another round of direct payments to households: $600 for individuals ($1,200 for married couples) and another $600 for children.

While these measures may help some people, it seems unlikely that the U.S. economy will be fully and durably reopened by the beginning of spring, when features of the act are due to expire. The new Congress will likely make supplemental economic impact payments ($1,400 per person has been proposed) an early order of business.

Broadly, voters seem hesitant to accept any tax increases, even if they fall on other taxpayers. The “blue wave” predicted by the polls failed to materialize and, as long as the economy keeps being pounded by waves of the pandemic, state and local governments could be a significant economic headwind in 2021 as funding of government services falls short, while demand remains elevated. The December measure also did not include additional aid to state and local governments, as some legislators view it as a bailout of states that were fiscally irresponsible before the crisis. Adding resistance to their renewal, the hurried rollout of the initial programs opened the window to rampant fraudulent claims—including $140 million in unemployment claims made on behalf of thousands of California prison inmates. Kowabunga!

At this point, it appears that environmental, anti-trust, financial and labor regulations are unlikely to undergo radical change. That said, President Trump made active use of executive orders and it’s a tactic that’s also currently being used by the Biden administration, as well.

In the end, stimulating economic growth through increased productivity is critical. Failing to do so will likely cause rough surf in both the economy and the financial markets.

November also brought news that COVID-19 vaccines had performed well in clinical trials. I normally don’t comment on biological sciences in this letter, as it is not my area of expertise. But, assembling an economic outlook must make some assumption about how long it will take to bring the perceived risks of the virus under control. The rollout of vaccines is exciting, and a testament to the speed with which innovation and free-market solutions are tackling the pandemic. But, there are still a number of large wave sets out on the horizon and they’re about to come ashore. Consider:

As summer ended and cooler weather drove people inside, as expected, the virus surged. This experience raises questions over whether lockdowns are an effective way of combatting the pandemic. Governments have been understandably reluctant to reimpose lockdowns, given their minimal impact to stamp out the virus and the immense economic costs of shutting down.

This far into the pandemic, our skepticism of whether a layoff is still “temporary” is growing.

A recent analysis by Bloomberg looked at the trailing 12-month operating income of firms in the Russell 3000 index relative to their interest expenses over the same period. The results paint a grim picture. More than a sixth of the index, or 527 companies, haven’t earned enough to meet their interest payments. As shown in Figure 2, the $1.36 trillion they collectively now owe dwarfs the $378 billion of debt zombie firms reported before the lockdowns wiped out their balance sheets. 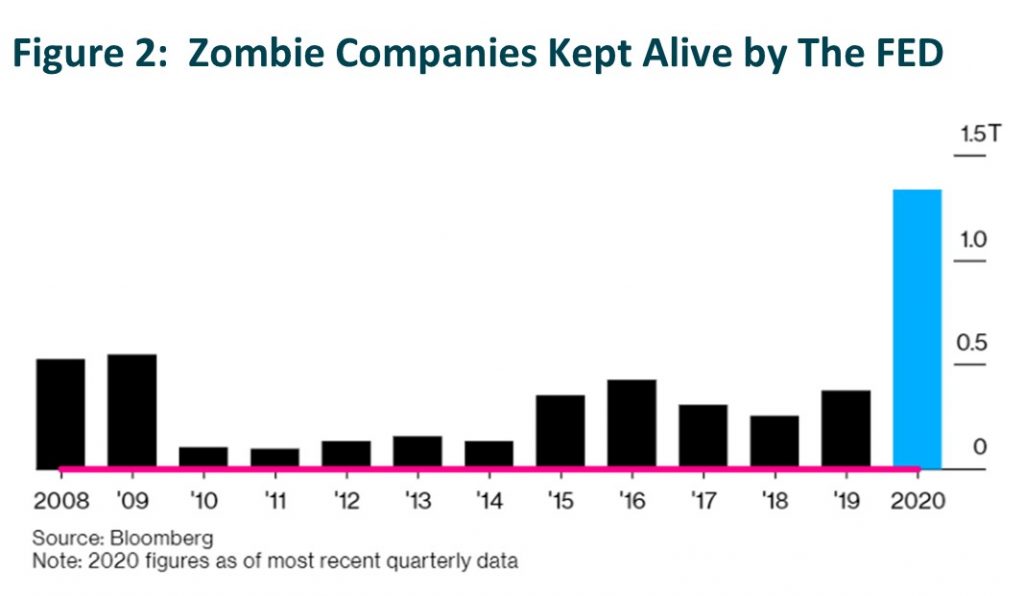 The winds may well shift in the months ahead from complacent stock investors riding an extreme wave of government “survival” payments that has lifted virtually all asset prices to the waves crest, to the “drop” (falling valuations) onto the waves face that will require carving (sharp turns) and timely shredding (skillful maneuvers) through a correction in prices and complex individual defaults and bankruptcies. All while avoiding a painful wipeout.

Much like learning to surf, it’s worth learning the three separate, but interrelated dynamics of markets and securities: fundamentals, conditions, and the “Vibe.” Fundamentals include things like earnings, debt, interest rates and the market valuation relative to them. Conditions are simply a way to analyze where we are in the market cycle by looking at things like rates of employment, productivity, and amounts of liquidity. And the vibe is really just a way investors are feeling toward something—particularly their inclination toward speculation or risk-aversion.

Typically, a security (or a market) becomes expensive as a result of good fundamentals leading to strong economic conditions and investors feeling “good vibrations.” The market valuations eventually become overextended, conditions begin to wane while, at the same time, the vibe turns into “Party Like It’s 1999”—largely due to investor FOMO (fear of missing out). But, remember –The Iron Law of Investing: The higher the price an investor pays today for some amount of cash (profits) in the future, the lower the long-term return the investor can expect on that investment.

In that context, it’s worth understanding what the present combination of depressed interest rates and extreme market valuations implies for long-term and full-cycle investment returns. As shown in Figure 3, the market value of the country’s publicly traded securities, as a percentage of their earnings, has never been as expensive as it is today, even at the 1929 and 2000 market peaks. Largely the product of soaring valuations amid deteriorating fundamentals, this measure is better correlated with actual subsequent market returns than every measure we’ve evaluated. I should add that the impact of the lockdown GDP and profit weakness during the second and third quarters of 2020—which would otherwise make this measure even more extreme—has been intentionally excluded. Unbridled speculation has now driven our estimate of prospective 12-year S&P 500 average annual total returns to  –3.6%. 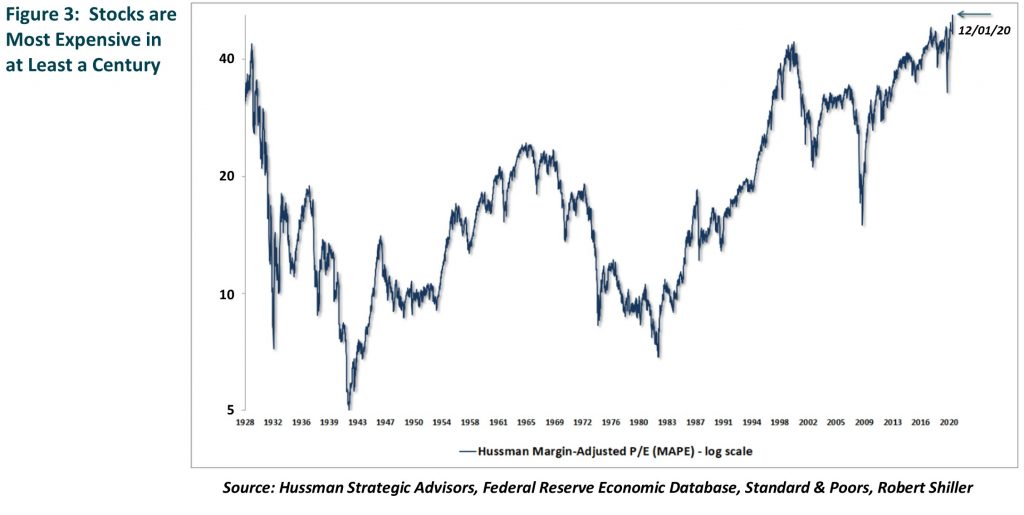 Driven by vaccines and additional government spending as pandemic-related shutdowns lessen, a majority of market forecasters expect an inflationary cocktail—including rising interest rates throughout 2021. A year of extreme fiscal policy bingeing (government spending) increased the total government debt securities outstanding from $23 trillion in December 2019 to $27 trillion as of December 31, 2020—a nearly 19% increase in the calendar year. Considering the economic destruction placed on individuals and small businesses by the virus and its resultant shutdowns, and the debilitating impact on GDP of excessive debt, we believe a long-term inflation cycle is not at hand and it’s prudent to expect that interest rates will continue to gravitate to lower levels as inflation continues to recede.

A lengthy detoxification period may also be required to get rid of the toxins (bad loans) in our system and regain financial sobriety. While the probability is rising that Congress is likely to support another “hair of the dog” fiscal hangover remedy that offers temporary relief, it only delays the inevitable, as the hangover will return when the drinking (spending) stops.

We do believe that there’s far more underlying economic and credit “whitewater” (read strain) developing beneath this extreme wave of stock market behavior than many investors realize. Portfolios with safety leashes securely attached are strongly recommended.

Past performance is not a guarantee or a reliable indicator of future results.  All investments contain risk and may lose value.  This material contains the current opinions of the author but not necessarily those of Plan Financial and such opinions are subject to change without notice.  This material is distributed for informational purposes only.  Forecasts, estimates, and certain information contained herein are based upon research and should not be considered as investment advice or a recommendation of any particular security, strategy or investment product.  Information contained herein has been obtained from sources believed to be reliable, but not guaranteed.  No part of this article may be reproduced in any form, or referred to in any other publication, without express written permission.  Plan Financial is a trademark or a registered trademark of Plan Life & Wealth Management, Inc., in the United States.  © 2020, Plan Financial.