Whenever you find yourself on the side of the majority, it is time to pause and reflect.     -Mark Twain

For several decades, the sovereignty of nations around the world has been under attack. The assault has not come from some powerful military force, but by international bureaucrats and a clique of economists in a league of elites everywhere—the people who “know” how the world should be run and expect the “trivial many” to stay in line (God must really love the “trivial many,” because he made so many of us!).

Until this year, the game plan worked for them like a dream. Not surprisingly, it hasn’t work so well for the mass of ordinary people, the poor “deplorables”. Over the last few years, we have observed with increasing concern how the proponents of this new international order were also tampering with interest rates, exchange rates and international trade—the very cogs that allow capitalism to work. Inevitably, under such a model of management, the world economy has gone from bad to worse.

The consequence is this year’s improbable and unexpected outcomes. The Cleveland Cavaliers bring their city its first championship in more than 70 years. The Chicago Cubs ended a drought of 108 years by winning baseball’s World Series. The British voted to leave the European Union in June. Then, perhaps most “surprising” (at least to the elite), the election of Donald Trump as president of the United States, a result which has momentous implications not just for the U.S., but for the grand projects pursued by the elites everywhere around the world.

It seems to me that the election results are less about what Trump believes and more about what he represents: a fundamental shattering of an old paradigm. What lies in ruins here is not common decency and morality, but rather an arrogant, entitled, conceited ruling elite and ruling paradigm.

Judging by Trump’s win, it would seem that the U.S. for its part does not believe that political dynasties should be left to solve the country’s challenges. As for Euro-land, when old and proud European nations such as Italy, France, the Netherlands or Germany decide to recover their sovereignty in order to manage their future democratically once again—it will mean the destruction of that financial Frankenstein’s monster, the Euro.

Trump’s election victory is a clear indication that the majority of people are not interested in a world government, but want to return to a classical, local democracy.

Global populism is the wave of the future, but investors must drive with caution to avoid taking a wrong turn by misinterpreting what makes America great. A few aspects of Trumponomics revolving around trade, immigration, and higher infrastructure spending might actually lower GDP growth, not raise it.

The Myths of Manufacturing: By whatever means, more punitive tariffs on trading partners or higher bars for new trade agreements, politicians’ ambition to create more manufacturing jobs and higher wages for factory workers may be at odds with reality.

As Figure 1 shows below, employment in the factory sector has been in decline for decades, even as output has continued to advance.

Technological displacement of jobs (robotization), not trade or immigration , is the root cause of the disconnect. What are we going to do when the multiple millions who make their living in the transportation industry, whether in trucking or as taxi drivers, see their jobs evaporate? This same employment paradigm shift is going to happen in dozens of industries.

However beautiful the strategy, you should occasionally look at the results.

Our family went to Las Vegas this past October to celebrate the 21st birthday of our son, Joel. I was reminded just how fascinating Las Vegas is as an observatory where human nature and intelligence often come into conflict. I was, and still am, most familiar with odds and the impossibility of beating the “House” on any game, other than blackjack, over a long period of time. Still, this commonsensical conclusion is not so obvious to many people. (I must admit, I did spot Joel $40 at the blackjack table. A couple hours later, he returned my $40, plus $10 interest giving me a 25% return while he came home with $100 in his pocket. Even private banking doesn’t pay as well as it use to!) Some suggest that they can win by using various betting “systems.” All of these illusions are a variation of “Doubling-Down,” which claims that it is mathematically impossible to lose, given enough money and the willingness of the casino (read investors) to take the increasing bet. It’s this latter condition, however, where reality meets the road.

Our financial markets have become a casino, betting that an unlimited supply of credit and ultra-low/negative interest rates generated by central banks can successfully reflate global economies and strengthen GDP growth in today’s highly levered world. Central bankers may want to consider the wisdom of Winston Churchill’s maxim: “However beautiful the strategy, you should occasionally look at the results.”

Since the Great Recession ended in the third quarter of 2009, the Federal Debt has increased from $12.3 trillion to over $19.5 trillion through 2nd quarter, 2016. An increase of over 58%. From the Fed’s and a historical textbook perspective (Keynesian)—both which hypothesize that government expenditures lift economic growth—the last few years should have been a period of accelerating economic activity.

Nevertheless, as shown in Figure 2, the economy has continued to sputter.

The fundamental rationale is that to increase their spending, government has to withdraw funds from the private sector (through taxes or borrowing). When this happens, the more productive private sector of the economy has fewer funds to use to make productive investments.

As an economy becomes even more indebted, additional government spending slows economic growth even more, along with productivity (as shown in Figure 3). 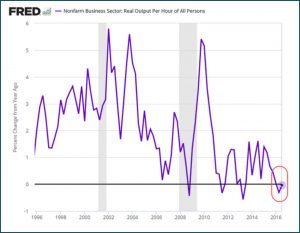 Additionally, initial conditions (an economic term for all the other factors that influence economic growth) are negative and have become more negative recently. The economy is in an expansion that is almost 8 years old. This means that pent-up demand for virtually all big ticket items is exhausted—apartments, single family homes, new vehicles, and plants and equipment.

With no signs of austerity and infrastructure spending likely to increase, debt-to-GDP ratios will be increased and will further depress growth. Therefore, interest rates are likely to move lower, not higher.

This will set off a chain reaction of unintended consequences. Low interest rates have and will continue to reduce the incomes of retirees, cause older members of the workforce to work longer and save more, and basically, have made it impossible for pension funds and insurance companies to meet their investment targets.

Central bankers counter with the cavalier attitude of “let them (savers) eat cake” (buy stocks). “Our job”, they claim “is to promote economic growth in the short term and restore stability via ever-increasing asset markets that eventually trickle down to the masses.”

Central bankers cannot continue to double-down without risking a “black swan” moment (an unexpected event that has a major impact) in financial markets.

As we start the new year, and assess our forward-looking return estimates and comparative valuations levels across global markets, we continue to have little doubt that the current market cycle will be completed by a 40-50% market collapse. A casual glance at Figure 4 shows that U.S. large equities are currently priced to provide a scant 1% real return per annum for the coming 10 years.

Chase the Future, Not the Past Performance

As investors, we want to buy low and sell high, which is easy to say and very hard to do. Whatever is cheap became cheap by treating us badly; whatever is overvalued, and poised to perform badly, got there by treating us very well. This is why successful investing requires that we regularly inflict pain on our ourselves. George Soros famously said, “successful investing is very painful.”

It’s a natural human tendency to forecast the future by extrapolating the recent past. This is the reason people chase performance, which is, in turn, the main source of the most grievous errors in investing. It’s in our DNA to behave this way! We are conditioned to seek the safety of crowds and being outside the herd s risky.

Now, to be sure, there are dangers ahead. No one can deny that. The great risk is replacing a failed paradigm with yet another one of a different flavor. What we’ve learned from populist revolutions past is that it is not enough to hate the status quo and overturn an existing ruling class.

We need to be clear on what kind of society we want to live in. What kind of people we want to be, what kind of ethical core should be at the center of our lives. This doesn’t come from government. It must come from the lives, choices, behaviors, and decisions of millions and billions of people who pursue personal responsibility.

The old is going away. The news is getting better and better as the elite suffer setback after setback. With one more effort, we will be back in a world where free markets determine prices, not government intervention. Only then, will we truly enjoy the bull market of a lifetime.

I have never felt so optimistic!

Past performance is not a guarantee or a reliable indicator of future results. All investments contain risk and may lose value. This material contains the current opinions of the author but not necessarily those of Plan Financial and such opinions are subject to change without notice. This material is distributed for informational purposes only. Forecasts, estimates, and certain information contained herein are based upon research and should not be considered as investment advice or a recommendation of any particular security, strategy or investment product. Information contained herein has been obtained from sources believed to be reliable, but not guaranteed. No part of this article may be reproduced in any form, or referred to in any other publication, without express written permission. Plan Financial is a trademark or a registered trademark of Plan Life & Wealth Management, Inc., in the United States. © 2016, Plan Financial.