The other day I read a fake news report about real news, and it convinced me that fake news isn’t the problem; real news is. Well, sort of, anyway. The problem isn’t “fake” news or “real” news, it’s us. The real problem is our tendency towards “confirmation bias”. What is confirmation bias? Essentially this: we seek out and favor sources of information which confirm or support views which we already believe. These sources are our “real” news. At the same time, we give considerably less time, attention, and legitimacy to those sources with which we disagree.

Of course there are news reports that are patently false, like those of the National Enquirer (except for the Elvis sightings – I’m pretty sure those are real). But what most of us don’t realize is that the vast majority of technically truthful news may also be fake. Why do I say this? Because news isn’t just facts. News isn’t neutral. Nothing is neutral. News, like everything else, is always given within the context of a worldview. And as such, there are opinions that form the way it is presented. In other words, our source of news is presenting an opinion about facts whether we realize it or not.

As we bemoan the epidemic of “fake” news today, keep in mind the problem may be the news we consider “real”.

The Atlanta Fed is posting an estimate of 0.5% GDP growth. At the same time, the NY Fed is estimating first quarter growth at 2.6% – a difference of 2.1%! 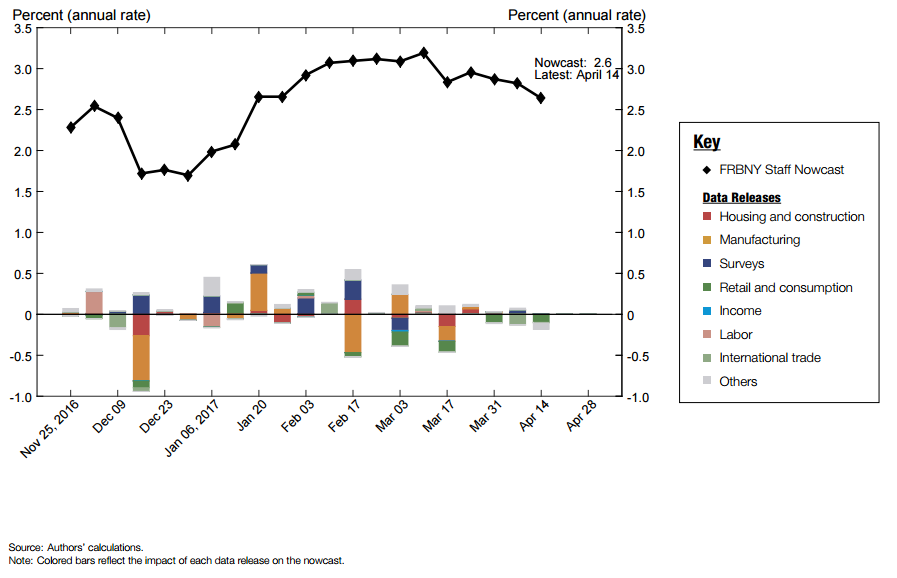 How do we explain one reserve bank estimating economic growth at over five times the rate of the other reserve bank? Simple: fake news. See, the Atlanta Fed’s estimate takes into account only “hard” data. The equation accounts for light vehicle sales, real consumer spending, and manufacturing data. The NY Fed, however, includes “soft” data as well. Consumer sentiment and small business optimism surveys are among the soft data points. In other words, the difference between the two models is, essentially, the optimism of the public. Which means that the NY Fed’s growth estimate is over five times higher primarily because of the surveys. That is, people are way more optimistic than the economic data justifies.

This isn’t a fluke. While the hard data suggests the economy is close to contracting in the first quarter, most small businesses think we are on the verge of a economic renaissance. While the U.S. stock market is priced at nearly twice it’s historical norms, it is almost 10% higher than it was before the election. Why? Because overly optimistic investors are piling into equities at a record pace – a result of the news touting the economic “improvements” under Trump.

A predictable outcome of confirmation bias, investors want to believe that things are getting better. So far, they are not. In fact, they may be getting worse.

Portfolio construction isn’t done in a vacuum. It shouldn’t be done near a wishing well, either. And yet, many investors (and their advisors) have recently been reallocating larger portions of their portfolio to US stocks. This decision is based on a very optimistic view of Trump’s presidency. And optimistic news, reporting on investor’s optimism, have confirmed their opinions. But while Trump may do some good things for business going forward, right now the hard data is telling us something is wrong. The US economy is clearly not healthy; and the stock market is way over-valued. We’ve seen this before, and it rarely ends well for individual investors who do not pay attention.

As you evaluate your investments, keep in mind the power of confirmation bias on both yourself and your advisor. And the next time you are tempted to complain about fake news, make sure the “real” news isn’t faking you out.