“You can check out any time you like, but you can never leave.” Hotel California, The Eagles

Last week it was reported that 45 people were killed while leaving a Jewish festival at Mount Meron. The annual religious festival attracts around 100,000 people. Its history dates to the Jewish resistance to Rome in the 1st century. Typical of the festival are dancing, singing, and bonfires. However, this year what began with joy and celebration quickly turned to tragedy. Although the massive crowds came a few at a time, most began leaving all at once.

The resulting crush – and the tragedy that accompanied it – was preventable. Inadequate facilities – specifically the size of the exits – were known to be a problem. But the pull of the festivities brought large numbers of people anyway. While incredibly tragic, the crush is a helpful illustration of what happens at the end of a stock market bubble. Irrational exuberance leads to the inevitable crush as everyone tries to leave the party at the same time. Today’s stock market is like investing in Hotel California. Checking out is easy – it’s leaving that’s difficult.

The financial markets are a party that has never been easier to join. You can “check out” (i.e., enter the market) at any time from almost anywhere. From Robinhood to Reddit, the unemployed to the retired, everyone is investing in stocks, options, and cryptocurrencies. Investors are exchanging dollars for non-fungible tokens (NFT’s), joke cryptocurrencies named after domesticated animals or literally named “scamcoin“, and stocks of companies like the deli in New Jersey valued at over $100 million with only $3k per month in sales. These are not anomalies – even traditional German savers are jumping into stocks. There are hundreds of special purpose acquisition companies (SPAC’s, for short) whose stocks are currently trading at prices worth billions. Yet they have no revenue, no business plans, and no future.

The entire stock market is over-valued according to the Buffett Indicator, which is why the Oracle of Omaha is currently sitting on $145B in cash. But to merely say that the S&P is trading at an expensive level wouldn’t do it justice. Currently, a share of the S&P 500 index trades at a level 40% higher than it was at the peak of the Dotcom bubble – right before its price dropped by 50%. 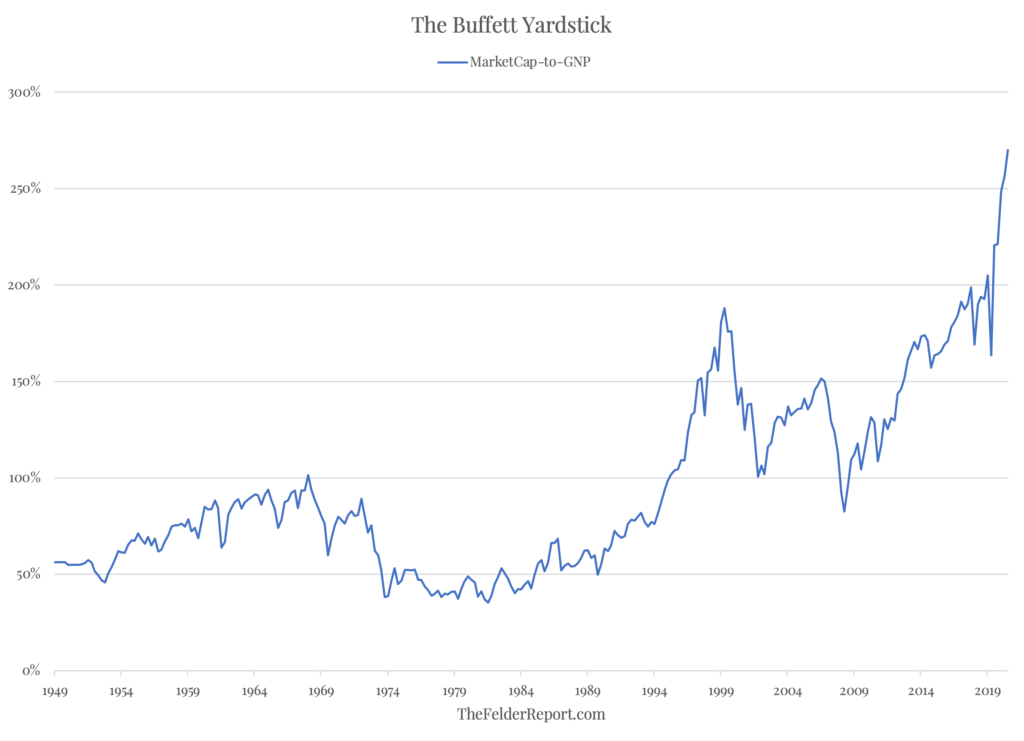 But as Jesse Felder points out in a recent market note, it isn’t just the Buffett indicator that is flashing red. The median price-to-sales ratio of the S&P 500 is nearly 75% higher than it was at the peak of the Dotcom bubble. Meanwhile, other measures such as the Margin-Adjusted CAPE, the Shiller P/E, Tobin’s Q, and even 12-month forward P/E (or “fantasy P/E’s”) all suggest the market is more expensive than at any time in history.

With prices seemingly always going up and free money flowing from the magician’s chest, the pull to join the party is strong.

It’s not as if this is a new phenomenon. In Securities Analysis, first published in 1934, Benjamin Graham and David Dodd provide a great description of the mentality of most investors during the build-up to the Great Depression. They note, “Instead of judging the market price by established standards of value, the new era based its standards of value upon the market price” (pg. 396). In other words, the higher the price, the higher the value. This becomes a self-fulfilling prophecy – the stuff manias are built upon. Any price is justified if it’s higher than the prior price.

Those who begin to see investing this way scoff at historical standards of value. They suggest fundamental value investing is out of date. It’s always “different this time”. And that’s true, things are never exactly the same. History doesn’t repeat. But the rhythm is unmistakable. 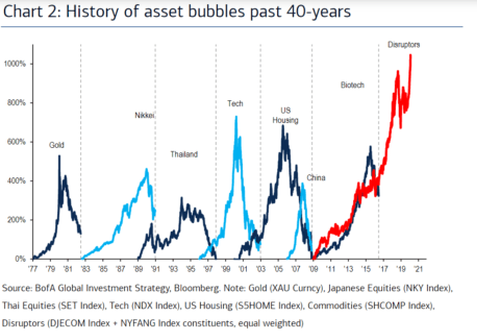 Graham and Dodd note just a few sentences later “The results of such a doctrine could not fail to be tragic. Countless people asked themselves, ‘Why work for a living when a fortune can be made in Wall Street without working?’ The ensuing migration from business into the financial district resembled the famous gold rush to the Klondike, except that gold was brought to Wall Street instead of taken from it.” It’s true, we are not in the 1930s. We’re no longer on the gold standard. We are now on the “just-trust-us-we’re-from-the-government-and-we’re-here-to-help” standard. But Graham and Dodd perfectly describe the past year of government stimulus and rising asset prices. While millions of Americans continue to be unemployed, the stock market is booming with the help of a massive number of individual investors piling into the market.

The Margin at the Margin

Prices are always determined at the margin. In any market, what the Austrian economist Eugene Bohm Bawerk called “Marginal Pairs” determine the clearing price. The market price will always be between the highest valuation of the first excluded buyer and the and lowest valuation of the first excluded seller. In a dynamic marketplace, it is these two actors that determine the price of a good. Marginal pairs are a necessary part of a vibrant marketplace.

Margin debt in the hands of marginal pairs, however, is not necessarily good. Investors who buy a stock at $50, and then sell it at $100 have doubled their investment. If, however, someone borrows $50 (i.e., uses margin debt) and uses $50 of their own money to make a $100 investment, they exponentially increase both their gains and losses. Supposing the price goes up to $200, they can sell the security and make a 200% gain on their investment (i.e., their initial $50 investment is now worth $150 after paying back the margin loan). But if the initial investment drops from $100 to $50 the investor loses 100% of their money after paying off the margin loan. An increase in price magnifies gains, and a decrease magnifies losses.

Below is a graph showing that the marginal buyers have doubled their leverage in the past year, and at a rate far faster than anything seen in the run-up to the Dotcom burst or the Great Recession. Current margin debt now stands at over $822 billion. Predicting when this party will end is an impossible task. But describing what the end looks like is not. 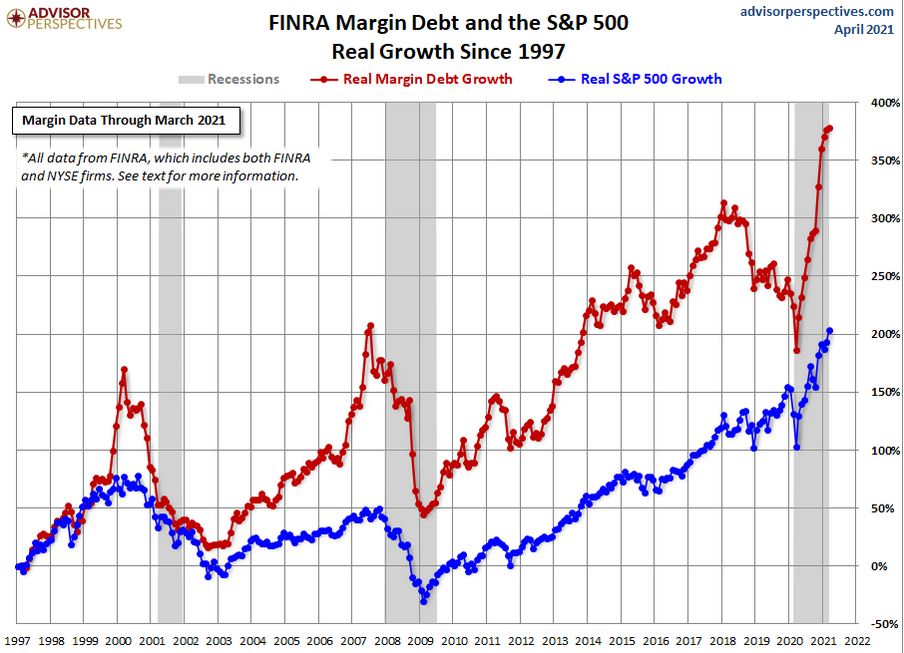 Investors are buying these financial assets one at a time, bidding for stocks at ever-higher prices. But their exit is likely to occur en masse. To paraphrase Graham and Dodd, once the price becomes the primary determinant in valuation, falling prices also become a self-fulfilling prophecy. The lower the price, the less a stock is worth to prospective buyers. Additionally, the unprecedented use of margin debt forces many investors to sell as prices decline. These contributing factors led to a stock market decline of 89% from 1929 to 1932.  Like buying shares of Hotel California, you can check out at any time, you just can’t ever leave. At least not without getting crushed on the way out.

You may think this time is different. You may believe that all this “free” money will propel financial assets to higher levels. It wouldn’t be the first time. The Yale economist Irving Fisher infamously suggested the stock market had reached a “permanently high plateau” in 1929. Fisher bet most of his family’s wealth on it…and died a relatively poor man.

Many believe that throwing money at everything that moves (and lots of stuff that doesn’t) is smart because prices are going up. They believe there are riches to be made on the wings of Wall Street. All I can say is: if you believe that, I have a bridge to sell you.

Well, not a bridge exactly. I have an NFT of a bridge. But what’s the difference?