Jay Powell And The Chamber of Secrets

“For the naive mind there is something miraculous in the issuance of fiat money. A magic word spoken by the government creates out of nothing a thing which can be exchanged against any merchandise a man would like to get. How pale is the art of sorcerers, witches, and conjurors when compared with that of the government’s Treasury Department!”

Ex Nihilo Nihil Fit: out of nothing, comes nothing. Obviously. But for the Greek philosopher Parmenides, and the entire ancient Greek culture, it was mind-blowing. The implication is that the world did not spring forth from nothing. Many Greeks concluded that the material world, then, must have always existed. They hypothesized an eternal physical universe as the only rational explanation for the current existence of physical matter. Within Christendom, the phrase Ex Nihilo became a common expression for God’s work in Creation. As the author of Hebrews says, “things which are seen were not made of things which are visible” (Heb 11:3).

Our politicians are currently haggling over whether to create $1 trillion or $3 trillion in their latest stimulus bill. This is in addition to somewhere north of $4 trillion they created in the first eight months of the year. As one government official said recently, “there is an infinite amount of cash in the Federal Reserve.” Apparently, the Fed has God-like powers to create the stuff ex nihilo. Jay Powell, the current Federal Reserve president, assures us plebeians that “as a central bank, we have the ability to create money digitally.” Doubt him? Just look at the chart below, which shows the raw power of the fed’s creative abilities so far this year. 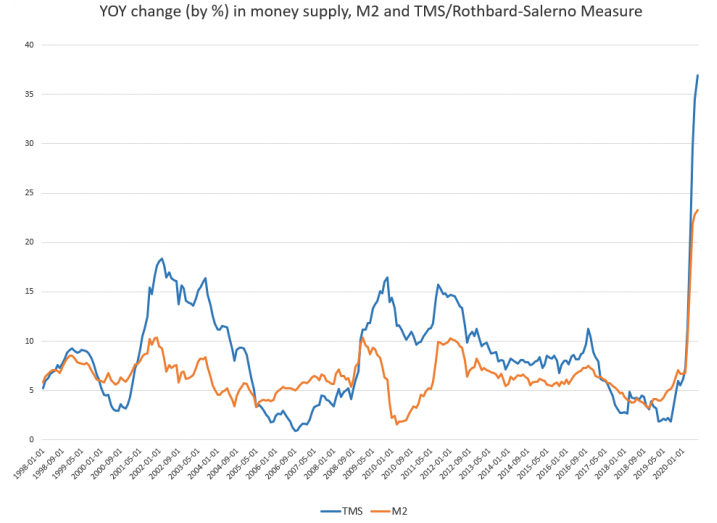 These dollars actually come into existence out of nothing by the power of the central bank’s chamber of secrets. As Ludwig Von Mises observed so many decades ago, “sorcerers, witches, and conjurors” cannot compete with the “magic word” spoken by government officials. Some of this cash, created out of thin air, makes it’s way to individuals who can in turn spend those funds on anything they would like. It’s almost as if the central bank creates wealth out of nothing.

If you wish to know why the Fed doesn’t just create $300 trillion (rather than a measly $5-10 trillion) so that everyone can receive a million dollars to buy their dream homes, you miss two important points. The first is that they are waiting on Michael Bloomberg to do so. Outdated political reference? Maybe, but no more outdated than basic math. The second reason is that they are not really being honest. Jay Powell has a monster of a secret that he’d like to keep in his deep, dark, chamber. The secret is this: creating digital dollars is not the same as creating wealth. And all the fed can do is create digits in the banking system. To mix movie metaphors, Jay Powell is no Gandalf – he really is just a conjuror of cheap tricks.

As stated above, out of nothing, comes nothing. Parmenides, if he were alive today, might suggest that these government officials study metaphysics a little more closely. The real reason the government isn’t passing $300 trillion budgets is that they know that this currency they are creating does not, in fact, correspond to anything in the real economy. In fact, it’s not entirely clear the fed’s activities are even creating money, but that’s a topic for another article. The important point is that to the extent they are creating money, they are demonstrating hubris of epic proportions. Stimulus checks, unemployment payments, PPP loans, and all the other bailouts are not creating any new wealth in the economy. They are simply creating a thin veneer of wealth, which actually leads to real wealth destruction.

An increase in the money supply, without a corresponding increase in productivity, is a recipe for bad investments, price confusion, and ultimately wealth-destroying monetary inflation. As governors across the nation decimated their local economies with draconian lockdowns earlier this year, the federal government responded by creating digital currency units that were supposed to make everyone whole. Rather, they are an exercise in the magical arts. These digital dollars are temporarily elevating asset prices while real wealth deteriorates. These dollar bills are also leading to increased prices in various goods and services that are becoming more scarce as the companies that produce them are closing.

Many companies that do stay in business are doing so by operating at a loss. They increasingly survive as zombies: dead but still technically in business. These types of companies, only able to pay their bills by acquiring more debt, actually consume wealth rather than create it. Capital destruction is the result.

Out of More, Comes Less

The question investors need to grapple with today is whether or not they believe in the government’s wizardry, or whether they accept the metaphysics of Parmenides and, well, the entire western tradition. If you think these stimulus bills and government deficits are actually helping the economy, then by all means continue to live, invest, and do business as if tomorrow’s trillions in debt will make things better. That may be a place of blissful naivete, but it’s not at all helpful for your financial security.

If however, you recognize the futility of men trying to create something out of nothing, then now might be a good time to re-evaluate your financial matters. There are ways to protect your wealth and even increase it during tumultuous economic and political times like these. But the general process we are currently undergoing is the process of wealth destruction, which is why prudence is needed now more than ever.

We are now enmeshed is an anti-capitalist assault on private property and the rule of law. This assault comes under the guise of “equality” and “economic justice”, but those are just euphemisms. The end result will be lower standards of living, a dollar with less purchasing power, and increasing civil unrest between those who suffer under government tyranny and those who use it to their advantage. The more the government grows its debt and increases handouts, the less wealth our country will produce and retain. It’s not a conundrum, it’s an implication of sound metaphysics. Parmenides was right – Powell is wrong. The government has nothing and can create nothing. The secret’s out. The cheap tricks won’t last forever. You had better plan accordingly.