Living In A Bubble

It is true that there exists a strong correlation between housing and wages.  If you were to ask many economists in the field what metric they felt was the greatest driver of home prices, many would no doubt immediately and confidently say “wages”. When wages go up, so do home prices. When wages stagnate or go down, so do home prices. Or, at least, they should. Unless you are living in a bubble.

Below is a graph comparing home prices and wages. The blue line gives us a broad sweep of housing prices across the nation since 1991. The red line gives us the gist of what wages have done in the same time period. Notice anything unusual?

Clearly, housing prices have outpaced wage growth…again. The last time there was a similar disparity between wages and housing prices, we a had a subsequent collapse of the housing market with millions of homeowners underwater. Now referred to as the “Housing Bubble”, “Credit Crisis” or “Great Recession”, ’07-’10 wasn’t a great time period for those who purchased homes in the early 2000’s. Many homeowners are still snorkeling. Soon, they may need to put on scuba gear.

Why the great disparity? Well, many people like simple answers. And many news stations will give provide them. “The Big Bad Wolf of Wall Street is the one that blew your house down, don’t ya know!” It’s plausible. It sounds nice. Blame those rich…well, never mind.

Still others, with the tenderness of freezer-burned beef jerky, say “The buyers were too excited and bought too high; they need to deal with the consequences.” While there is a certain degree of truth to this, I still don’t think it gives us the full picture. Besides, it seems rather heartless to suggest that those who were often misled and enticed with highly emotional reasons to purchase are totally to blame.

While all of these factors contributed to the housing bubble, there is one other reason that is often overlooked. It is the role of the Federal Reserve System and it’s strangle-hold (a.k.a price-fixing) on interest rates. Consider the graph below, which is the same graph as the one above, only with the Fed Fund rate added in green (and some cool red arrows I added in PowerPoint): 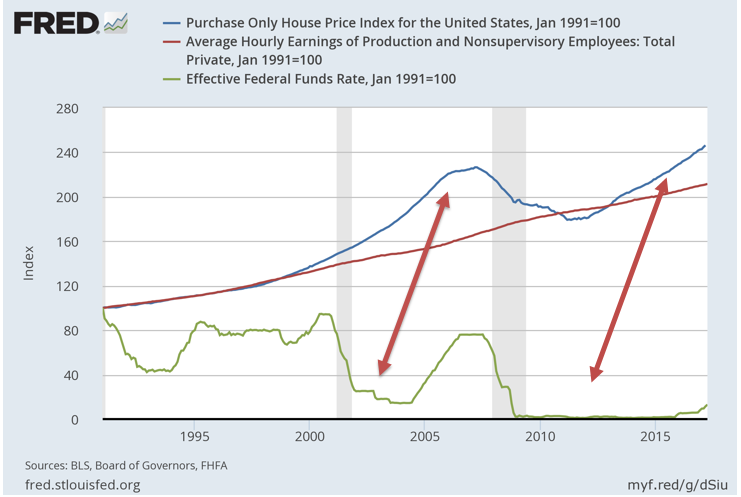 Why does this matter? Because when interest rates are low (and I mean real low), everybody (and I mean everybody) can buy more house. From the mom & pops to the flippers to private equity, everybody can more easily dive into debt. This happened in the early 2000’s, when the Fed cut it’s rate from 6% to 1%. And it has happened again in the aftermath of the Great Recession, when the Fed slashed it’s rate from over 5% to near zero.

When interest expenses drop so dramatically, not only do individuals have access to more funds with credit flowing like gravy out of the side of my spoon-made mashed potato crater, but they also can afford higher prices. That is, they can afford much higher prices than – and here’s the key – what their wages would otherwise suggest. Hence, the large, gaping discrepancy between housing and wages is strongly correlated with the Federal Reserve’s interest rate manipulation.

This has now happened twice. The first time didn’t end well. This time is different, of course, and yet it never is.

I added a “.1” to the end of Bubble 2.0. Reason being, as confident as I am of it’s eventual implosion, I cannot be certain of the timing of said bubble’s popping. Like those lovely iPhone updates you get every other day, this prognostication will likely need to be adjusted as data continues to roll in.

After all, we cannot underestimate the Federal Reserve’s overestimation of their role in “stabilizing” the economy. At the same time, we can almost count on them creating even bigger bubbles through their misguided policies. The confidence they have in their own economic understanding is unshakable, and mistaken. One such shining example was provided recently by Minnesota Fed President Neel Kashkari. In a recent article, Kashkari posed the rhetorical question: “Could it be that such low rates make bubbles more likely to form and, if so, what should we do about it?” Sadly, he lamented that “we don’t have a good answer to this question.” This, despite the fact that F.A. Hayek won a Nobel Prize in economics for demonstrating – get this – Central Bank’s crucial role in creating bubbles. Oh my, and this guy is in charge?

What to do now

Everyone’s situation is different. While we certainly expect a healthy correction in the housing market over the next few years, that doesn’t mean everyone should run for the exit. And since we at Plan Financial are fiduciaries, we really need to know more about you before giving specific advise.

In general, however, we are recommending those who plan to sell soon (1-2 years) go ahead and put their homes on the market. For those looking to buy, if their circumstances allow it we would suggest they wait. Decisions are never made in a vacuum (or at least, they shouldn’t be), so understanding all the relevant factors is important. In that vein, the one thing that you must do when seeking counsel is make sure that your advisor at least understands the problems facing the market. There is a difference between living in a bubble and purchasing a house for living, in a bubble. The former only requires intellectual enlightenment to fix. The latter can take a lifetime to pay off.