The Dukes of Moral Hazard

“Makin’ their way
The only way they know how
That’s just a little bit more
Than the law will allow”
The Dukes of Hazzard Theme Song, 1980

With the onset of the government lockdowns and the economic downturn, government officials were under pressure to do something. And so they responded, “the only way they know how”. In February the stock market began declining in earnest. The S&P 500 dropped 35% in less than a month – the worst month in stock market history. Soon after, the Fed dropped the Fed Funds rate to zero and announced that they would begin buying a variety of assets to “support the markets”. The biggest announcement was that, for the first time ever, they would begin buying corporate debt assets. Over the next several weeks, the Fed’s balance sheet increased at an unprecedented rate.

All in all, the fed injected the economy with a three-trillion-dollar dose of moral hazard. And like an irresponsible bar-tender, their actions have intentionally impaired the judgment of many investors.

The S&P 500 (the blue line) is nearly 10% higher than it was a year ago, in spite of plummeting earnings, record unemployment and an expected near 40% decline (the red line) in GDP in the second quarter.

The stock market rebound from the March lows coincided with the Fed’s announcements and the increase of their balance sheet. For many investors, the rebound in stocks is “because of the Fed”. “If the Fed is going to begin buying corporate assets, then I can’t lose money” is how the reasoning goes. The Fed, it is thought, is bidding up the prices. But is it?

The short answer is no. The Fed’s corporate bond buying only began in mid-June long after the fastest 40% rally in US stock market history – as well as a huge rebound in bond prices – was over. And this surely shouldn’t be missed: the Fed didn’t have to buy securities, it just had to make investors feel as though they couldn’t lose money by buying securities themselves. What has taken place is the conversion of the financial markets from a signal of production to a craps table. The NYSE has taken a vacation to Vegas – courtesy of the Fed.

The increasing balance sheet was largely the result of buying government securities, enabling D.C.’s financial profligacy. Sure, the lower bond yields increased the moral hazard of corporate America, leading to a massive new wave of corporate debt. How massive? Only the largest amount of new issues of corporate debt in history. But the Fed isn’t creating new wealth – they are simply creating more moral hazard. There is a difference.

One man’s junk is another man’s treasured junk

Below is a graph provided by Jeffrey Gundlach of Double Line Funds, which shows the cumulative flows of money into and out of one major high yield ETF (JNK). The ticker JNK is an abbreviation for ‘junk’, which is what this fund invests in. Junk bonds are debt instruments of companies that have weak financials and a greater likelihood of failing to pay back their debts. In good economic times, investors in these assets are rewarded with higher interest payments for the higher risk that these companies will fail. In difficult economic times, these companies are often the first to default and stop paying interest. Investors lose their money or at least part of it. So in a severe economic downturn like the one we just started, we would expect investors to sell these types of assets. Better to get some of your money than none of it, right? 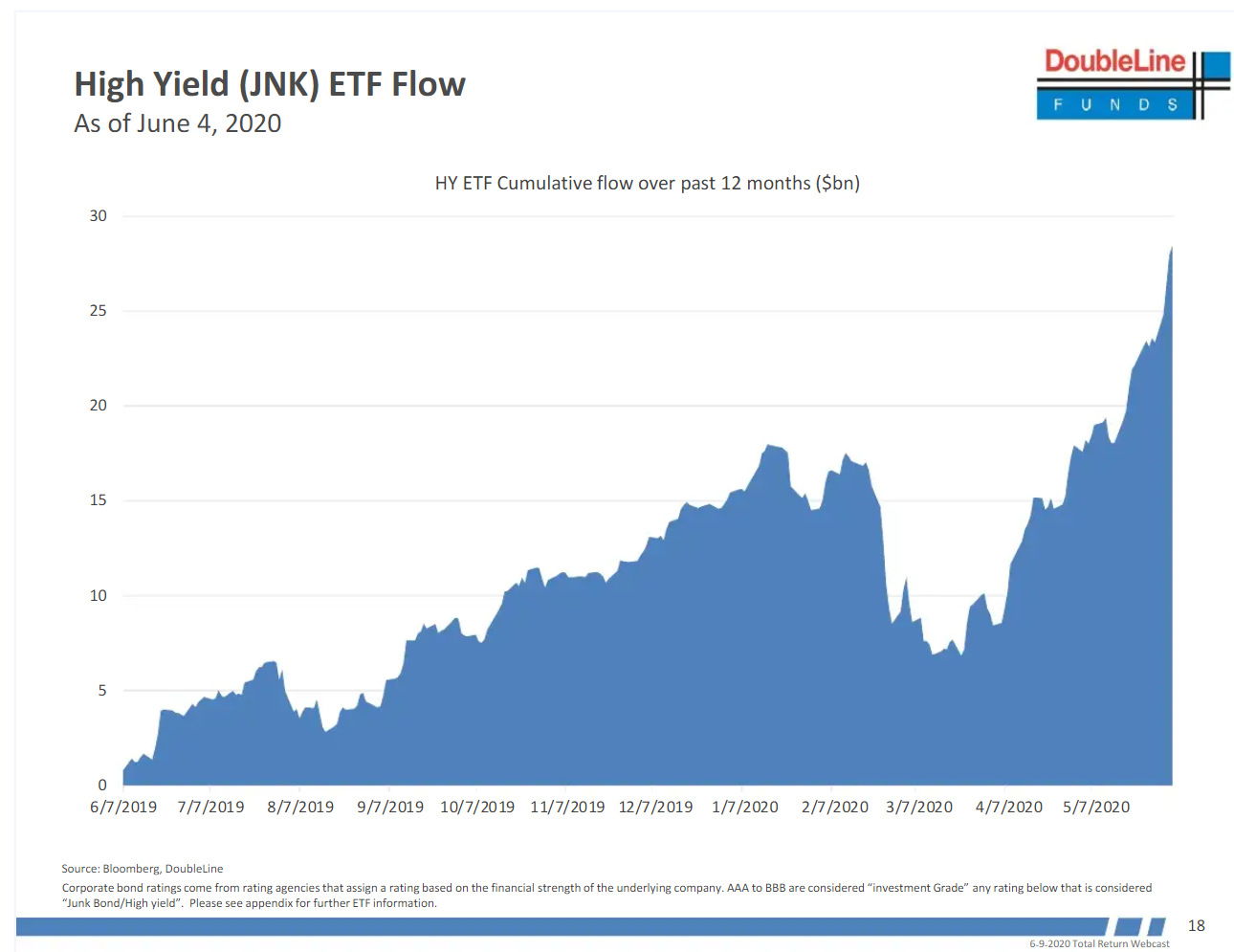 I guess not. As the graph makes clear, investors did sell, at least initially. Until, that is, the Fed said it would “support the market” in early March. Then, on cue, with the strength of a 69’ Dodge Charger investors drove the prices right back up. What would cause investors to buy securities that are sure to lose money over the next few years? The same thing that causes someone to place a wager in a casino – the thrill of winning the bet.

This phenomenon is relatively mild in comparison to the stock market. Bonds, at least, are higher on the capital structure. Bondholders typically receive something in bankruptcy. Not so for stocks. Common share prices typically go to zero when companies go bankrupt and recapitalize.

But recently, several companies have filed for bankruptcy or have indicated their intention to do so. What has followed these announcements are massive rallies in their stock prices. It’s bad enough to buy debt assets of bankrupt companies near their par value. But why on earth would you buy stocks that are almost certain to be entirely worthless? 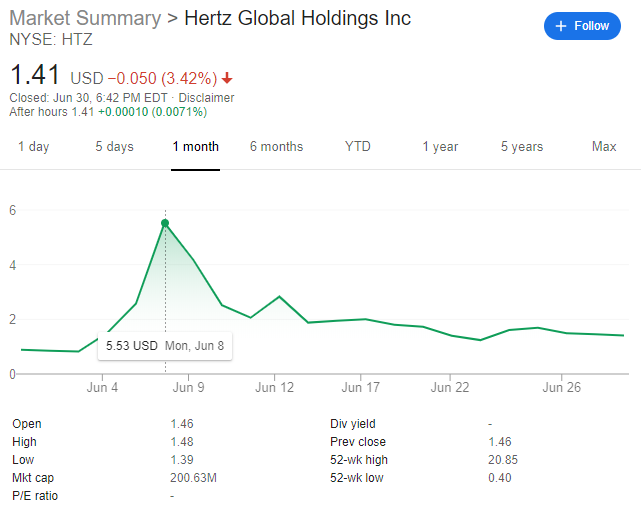 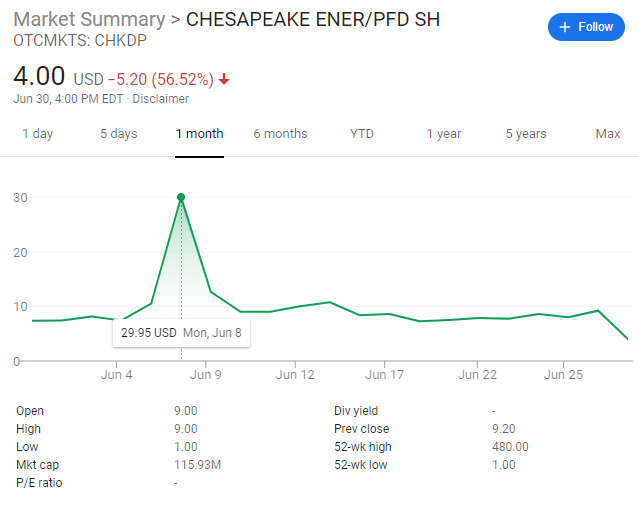 These are merely the most extreme examples of the mania. The stock market as a whole is also suffering a glut of moral hazard. Company earnings have been decimated by these lockdowns, and many more are likely to file for bankruptcy over the ensuing months. But while earnings plummet, the stock market is near its peak, levitating like Wiley Cayote over a cliff. As was pointed out in our last newsletter, the entire market demand for stocks over the past decade has come from corporations selling debt and buying back their own stocks. Instead of investing in research & development – and, as a result, labor, wages, and growth – corporations lined the pockets of senior management by bidding up the price of their stocks. They did so by using cheap debt – courtesy of the givers of moral hazard. The Fed, by keeping interest rates low for nearly a decade, encouraged corporations to mismanage their capital structure. And without corporate buybacks, stock demand would have been net negative since 2009. 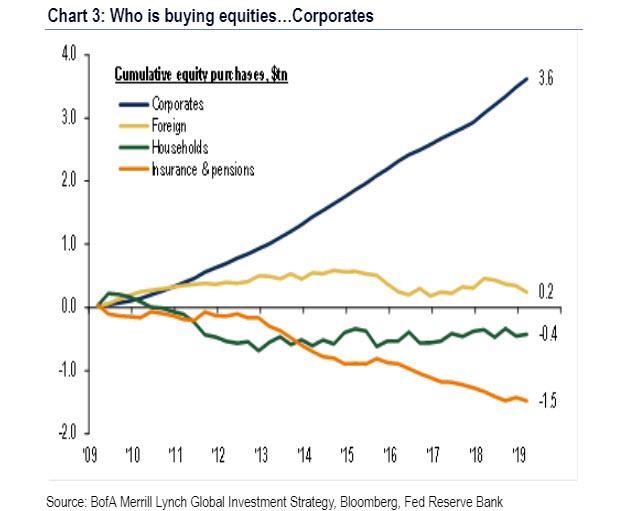 Marxists insist the essence of capitalism is that owners profit at the expense of labor. Many Americans see what is going on today and find in this narrative a consoling explanation. But identifying a problem and identifying the cause is not the same thing.

Corporations certainly share some blame for succumbing to temptation and indulging in self-seeking behaviors. But it’s not private property or profits that are the problem. It’s the presence of moral hazard – which is innate to any system of economics or politics that thinks in terms of “power over” rather than of “service to” others. The larger share of the blame of our current predicament lies with the dukes of moral hazard, who continue to use their power to encourage such behavior. Giving the bureaucrats even more control over the economy, as many politicians would like to do, is not a solution. Rather, it’s a sure-fire way to make everything worse.

The Fed cannot save investors from eventual loss. Either the value of securities will drop or the value of the dollar will. Nor can the Fed keep all the zombie companies in business indefinitely. Even if their security purchases could keep asset prices elevated (which they can’t), unprofitable companies eventually file for bankruptcy. And bankruptcy means common shares and debt assets are worth little to nothing. Loss of capital will occur, even if the Fed (i.e. the tax-payer) is the one holding the bag.

But the Fed’s goal isn’t to own corporate America, at least not yet. The announcements of market support by the Fed are meant to encourage speculative activity by the private sector. The Fed doesn’t want to buy any of these assets, per se. Rather, the Fed wants to increase the moral hazard of private investors, encouraging them to buy the assets instead. The fact that this leads to reckless buying of worthless or over-priced assets is – speaking in the most charitable way possible – an unintended consequence. Speaking more plainly, it’s evil.

The increase in moral hazard, as well as the destruction of honest price discovery in financial markets, will have serious consequences moving forward. Increasing wealth inequality, declining wages, lower productivity growth, and social unrest are likely to worsen. These are not caused by capitalism itself, but rather unconscientious capitalists drunk on moral hazard. This is the inevitable result when bureaucrats tinker with the capital markets, introducing perverse incentives up and down the corporate ladder. And while these arsonists are being praised for spraying some sort of clear liquid on the fire, much of the blame rests on them. As it turns out, that clear, strong-smelling liquid isn’t water.

The Federal Reserve has once again fallen prey to Frederic Bastiat’s 150-year-old critique of poor economists: an inability to see anything beyond immediate effects. The immediate results of Federal Reserve money printing are “positive”, in the sense that financial asset prices have not dropped significantly and some businesses have been able to remain open. But like a child in the midst of a sugar rush, this is not permanent nor desirable in the long run. The unintended – and so-far unseen – effects of the Fed’s recent actions are manifold. The most immediately relevant of which is the rampant moral hazard now driving asset prices into the stratosphere. The lemmings are rushing into the market at exactly the wrong time. Buyer beware.

The temptation now is to join the party. But the problem with avoiding bad consequences is that they never really go away. Increasing moral hazard doesn’t actually remove bad consequences. It rather delays and – in many instances – magnifies them. There may come a day when the Fed begins buying individual stocks and bonds in earnest, fueling the flames even further. That would be another nail in the coffin of free-market capitalism. But for the time being, capitalism isn’t dead. It’s just been liquored up and knocked unconscious by the blunt tools of those hazardous dukes. The storm clouds are gathering, but there are safe (and profitable) places to go (Proverbs 27:12). It would be wise to manage your assets accordingly.