Last year, I argued that interest rates might creep a little higher before they would ultimately begin declining. My argument was that the higher interest rates would actually indirectly cause the eventual lowering of rates. At the time, the Federal Funds rate was approaching 1.75-2% and the talk was of further increases going forward. Sure enough, the Fed increased rates twice more – once in September and once in December. This brought the Fed Funds rate to 2.25-2.5%.

A mere seven months later the Fed has begun reversing course. The recent interest rate cut by .25% is just the beginning. The reasons for this are manifold, at least from the perspective of the Fed itself. Ultimately, however, the Fed wants to avoid an economic slowdown and they think cutting interest rates may do it. Unfortunately, like a daisy flower in front of an avalanche, the Fed can’t stop the economic slowdown.

Easing or tightening – does It matter?

Because of the existence of a central bank, the price of money isn’t based on market forces. This is the “risk-free” rate, or the Fed Funds rate. To be sure, other interest rates are floating and react to market influences. However, the mother of all rates – the rate from which all other rates come – is artificially and coercively determined apart from the preferences of individual market actors (i.e. people).

The Fed Funds rate, as basic as it is to the economy, has far-reaching influences. One of the ways in which the Fed Fund rate exerts its influence is by indirectly expanding or contracting the ability (and incentives) for banks and other lenders to provide credit to potential borrowers. When the Fed begins pushing rates higher, it typically has the effect of decreasing the rate of credit expansion. The more borrowers have to pay to borrow money, the less demand there will be.

When the Fed is in the process of raising interest rates, economists call that “tightening” because access to credit is getting more difficult. It’s like tightening the water facet. Conversely, when the Fed is in the process of lowering rates, economists call that “easing” because the facet is opening wider as credit expands. Theoretically speaking, the Fed uses this tool to moderate economic expansions, and to minimize economic contractions. They ease when the economy is shrinking, in order to encourage growth and mitigate the pain of recessions. Conversely, they tighten when the economy is expanding, to avoid creating credit (i.e. excessive debt) bubbles. At least that’s the official story. As Yogi Berra once said “In theory, there is no difference between theory and practice. In practice, there is.”

What easing really does

The purpose of interest rates is to inform entrepreneurs of the availability of credit. In a free-market economy, declining interest rates indicate a surplus of savings, because increased supply lowers the price of money. This signals increased capacity, productivity, and demand for expanding businesses. Hence, when interest rates are declining in a free market, it’s typically a good time to expand business ventures. However, in an economy influenced by a central bank, the lowering of interest rates typically coincides with weaker savings, declining productivity, and recession. Why? Because central bankers are controlling the base rates, not the free market. Central bankers believe they can fix a weakening economy simply by encouraging individuals and businesses to increase their activity via new debt. And the best way to do that is by lowering the cost of borrowing.

This results in a massive expansion in debt for individuals and businesses at the worst possible time. Because of the central bank activity of lowering interest rates at the end of a business cycle, businesses become increasingly indebted at a time when the real economy is declining. The inevitable result of this perverse system is the creation of asset bubbles, primarily in the stock, real estate, and bond markets. Asset prices appreciate because of artificial increases in debt while productivity or population growth (the basic drivers of real economic growth) stagnate or decline.

What tightening really does

While easing has the unintended effect of creating asset bubbles through debt expansion, tightening has the opposite effect. Once asset bubbles have been created, they require an ever-increasing expansion of debt to keep them from imploding. This is intuitive: increasing amounts of debt need to be serviced by increasing earnings or, through artificially low-interest rates, increasing debt. If businesses aren’t growing their revenues, they will rely on debt to provide for their operating expenses. In situations like this, credit becomes a sort of drug that requires ever more hits to maintain a high and avoid the inevitable symptoms of withdrawal. These entities are “zombie” companies. Although their doors are open for business they are essentially dead. Towards the end of credit cycles, zombie companies become prevalent, as I noted last Halloween is now the case all over the western world.

So what does tightening (i.e. the raising of interest rates) really do? It essentially nukes the entire landscape, killing even the scraps zombie companies could use to survive. By increasing the cost of borrowing more money, the central bank is making it more difficult for overly indebted companies to survive.

Thus, when the central bank “tightens”, it is not preventing the economy from growing too fast. Rather, it is pulling the rug out from underneath businesses which are now dependent upon cheap credit. The Fed is pricking the bubble that it just finished inflating.

Today, the Fed has just begun easing. According to the theory above, that should be good for the economy. In fact, this is what the headlines want us to believe. But as any critical thinker knows, the three keys to interpretation is first: context. The second is understanding the context. And the third key is to really consider the context. The fact is, easing isn’t good for the economy at the end of a tightening cycle. The bubbles have already been inflated, and the pin has already been pushed into it. Consider the last two decades. 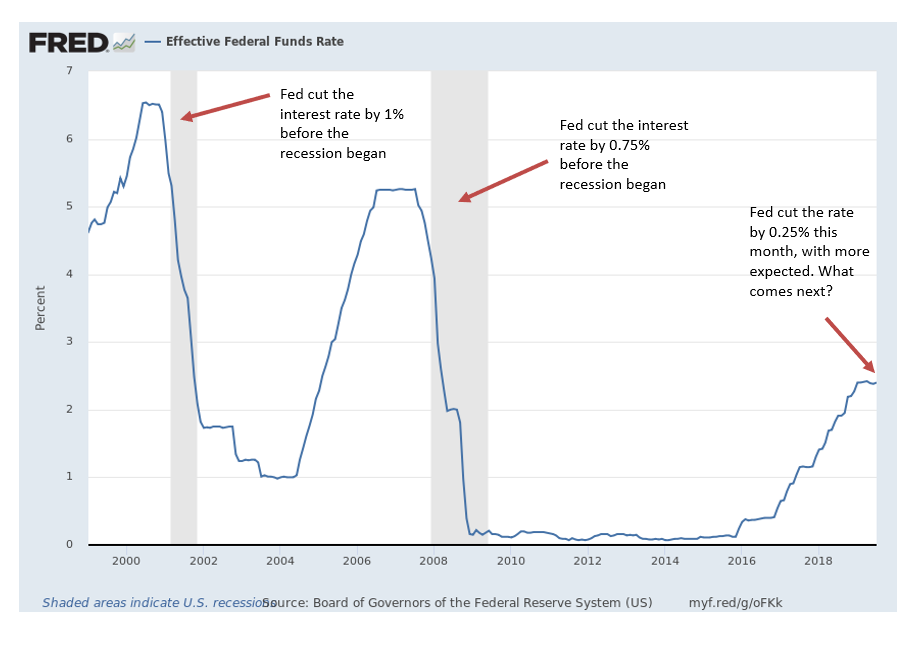 At this point, the Fed can’t win. And, of course, this is because a few people in a board room in Washington can’t possibly know what is best for the 350 million people from sea to shining sea. They don’t know what the supposed “risk-free” rate should be, and they don’t know in what direction it should be heading. The emperor really doesn’t have any clothes.

With the yield curve almost completely inverted, the odds of a looming recession are high. And while the Fed is now abruptly changing directions in an effort to avoid a slowdown, it will ultimately prove futile. The economy is not a wholistic organism that the powers-that-be can effectively manage. Rather, as Ludvig Von Mises points out, the economy is a billion individual human actions. No human (or humans) can effectively manage such complexity. Communism, socialism, and every kind of other collectivist philosophy ultimately fails for this very reason – man is not omniscient. Man cannot play god and succeed. At the end of the day, the Fed is powerless to stop the growing recessionary pressures. The “everything bubble” is an ugly creation of central bankers. And like Frankenstein, it’s a monster they can’t control.

However far be it for me to end on a completely sour note. The global economy continues to grow. The spread of information and the speed at which it travels will be too beneficial for the economic mismanagement of our bureaucratic overlords. Western economies will likely struggle for the foreseeable future, given their deep-seated commitment to debt and welfare spending. But the world is a big place, and incredible investment opportunities await.