“On behalf of the Time Variance Authority, I herby arrest you for crimes against the Sacred Timeline.” – Hunter B-15

In Disney’s newest show Loki, we are introduced to variants. Variants are people who deviate from their predetermined roles in the unfolding of history. When these so-called variants arise, they are promptly dispensed with by the Time Variance Authority (TVA). Loki is one such variant, and according to the TVA he’s a threat to the unfolding of the “sacred timeline.” The TVA likes things predictable, clean, and nicely organized. Variants create chaos, and therefore must be done away with. It’s a fair bit of fantastical fun (or creepiness, depending on how one views bureaucracies in general), but as it turns out, we are dealing with our society’s own – less fantastical – variant these days. Like Loki, this variant is inconvenient for those attempting to write the story. Like Loki, this variant wants to chart a different path.

Since the beginning of the pandemic, we’ve heard about all the crazy money printing. Just in the United States, for instance, the Federal Reserve has increased the base amount of money by more than 5 trillion dollars over the past 16 months. This equates to an almost 30% increase in a year compared to annual historical increases of around 5%.

Not surprisingly, prices are rising for everything from used cars to computers to produce. Most everyone has noticed the increasing bite out of their wallet at the grocery store, or in their Amazon cart. And at least so far, these increases in prices give no indication of slowing down. In fact, there is a growing consensus among a variety of market analysts, institutional investors, and economists that price inflation is here to stay. Below are the Cleveland Fed’s latest inflation numbers, and they are literally off-the-charts when compared to inflation numbers dating back nearly a decade.

The green line (headline CPI) is more than double what it was way back in 2012. The Bureau of Labor and Statistic basket of goods prices rose 5.4% in June over their prices in June 2020. July’s number is expected to continue the trajectory upwards. But even if the rate were to level out at this point, sustained inflation over 5% is something we haven’t seen in a long, long time.

The recent rise in commodities also supports this narrative. Commodities are real tangible assets that tend to do well when in inflationary environments. The S&P GSCI Commodity Index, for instance, has risen by over 30% since the beginning of the year, and by nearly 100% since the bottom last April. And this is after a sustained decline for well over a decade. 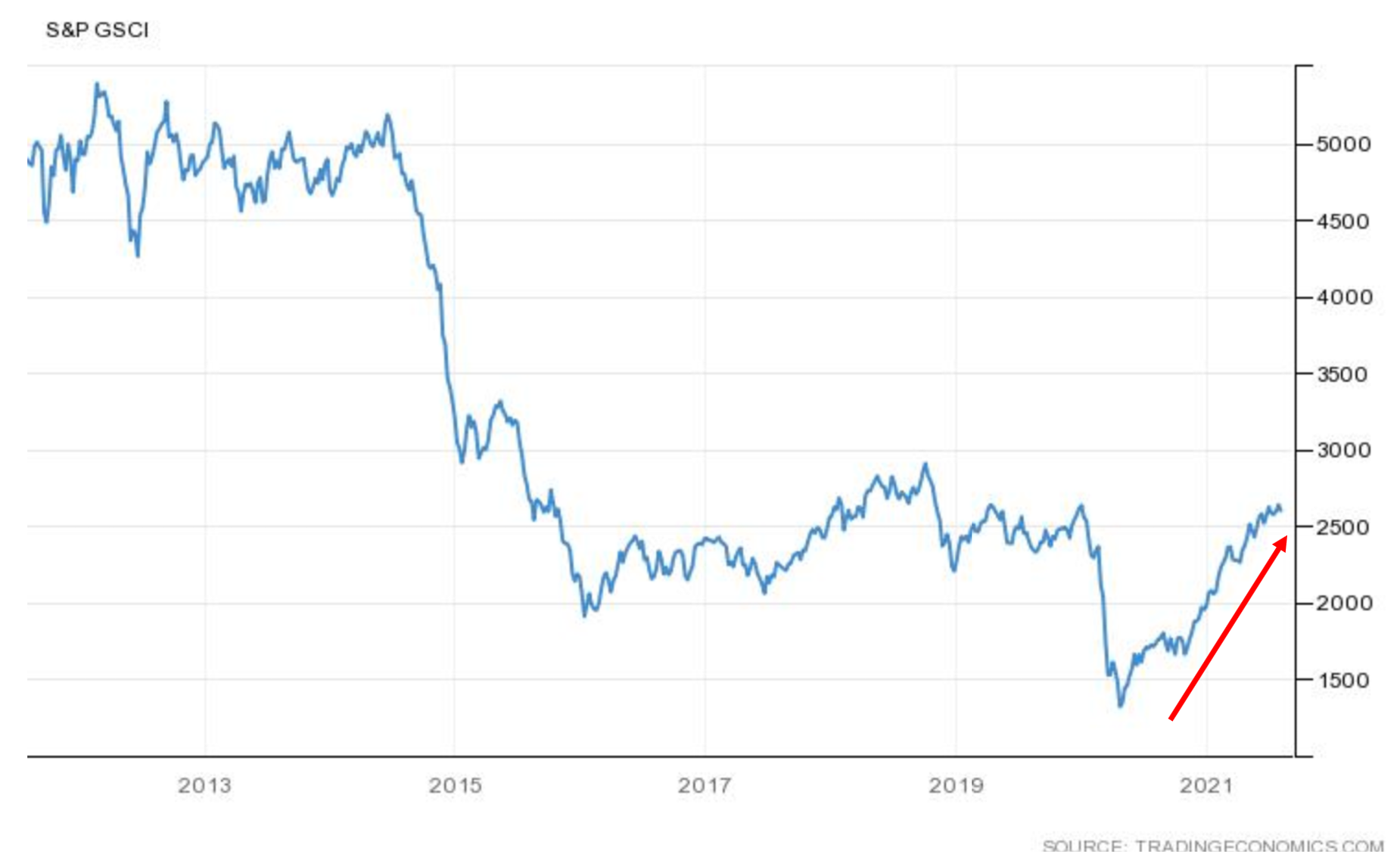 Further evidence of the inflationary outlook is the performance of the stock market, which continues its relentless march upwards. Many investors view stocks as an “inflation hedge” because they have performed well during long-term inflationary periods. But while stocks can perform well during inflationary environments, however, many investors have failed to recognize that that is only the case after stock prices become cheap. At today’s obscenely high prices, however, stocks will likely provide little in the way of protection going forward. According to the “Buffett Indicator”, stock prices are roughly 2.5X higher than their historical norms, and in desperate need of some TVA-style treatment.

Everyone agrees on the inflationary trajectory of our immediate future, and the reasons for it. More money printing means rising prices in stocks, commodities, and pretty much everything else we buy. This is the sacred timeline, and the TVA must protect it.

Bonds – A Variant In The Timeline

Over the past few months, however, the bond market is deviating from the inflation story. Inflation is typically good for those who own stocks (when their prices are fair), or real assets (like commodities). But not so for bonds. Bond rates reflect – at least on a fundamental basis – the value of time. If the value of time goes up (i.e. growth expectations increase), existing bonds should drop in price because they reflect lower time values. This can also occur in inflationary environments, as inflation expectations are also a key component of the interest rate.

The opposite is the case in environments with lower growth or deflationary expectations. The coupon rates on existing bonds become more valuable as interest rates and prices decline. Put simply, in inflationary environments where growth expectations are increasing, bonds should go down in price. Rates should go up. And for the second half of 2020 and the first few months of 2021, bond rates did exactly that.

Since April, however, bond prices have been going up all over the world. Rates, therefore, have been going down. Treasury bonds, for instance, have gone up over 15% since mid-March. The graph below shows the 10-Year Treasury yield, which has dropped from 1.74% to below 1.30% after moving higher since last summer.

The treasury market isn’t the only one. Japanese bond yields have also been trending lower, dropping from 0.15% in February to below 0.05% as of late.

Even German Bunds have begun trending lower over the past few months. In fact, the entire German government bond market is now trading in negative territory, which would be odd indeed if we were on the verge of a burst in global growth and inflation. 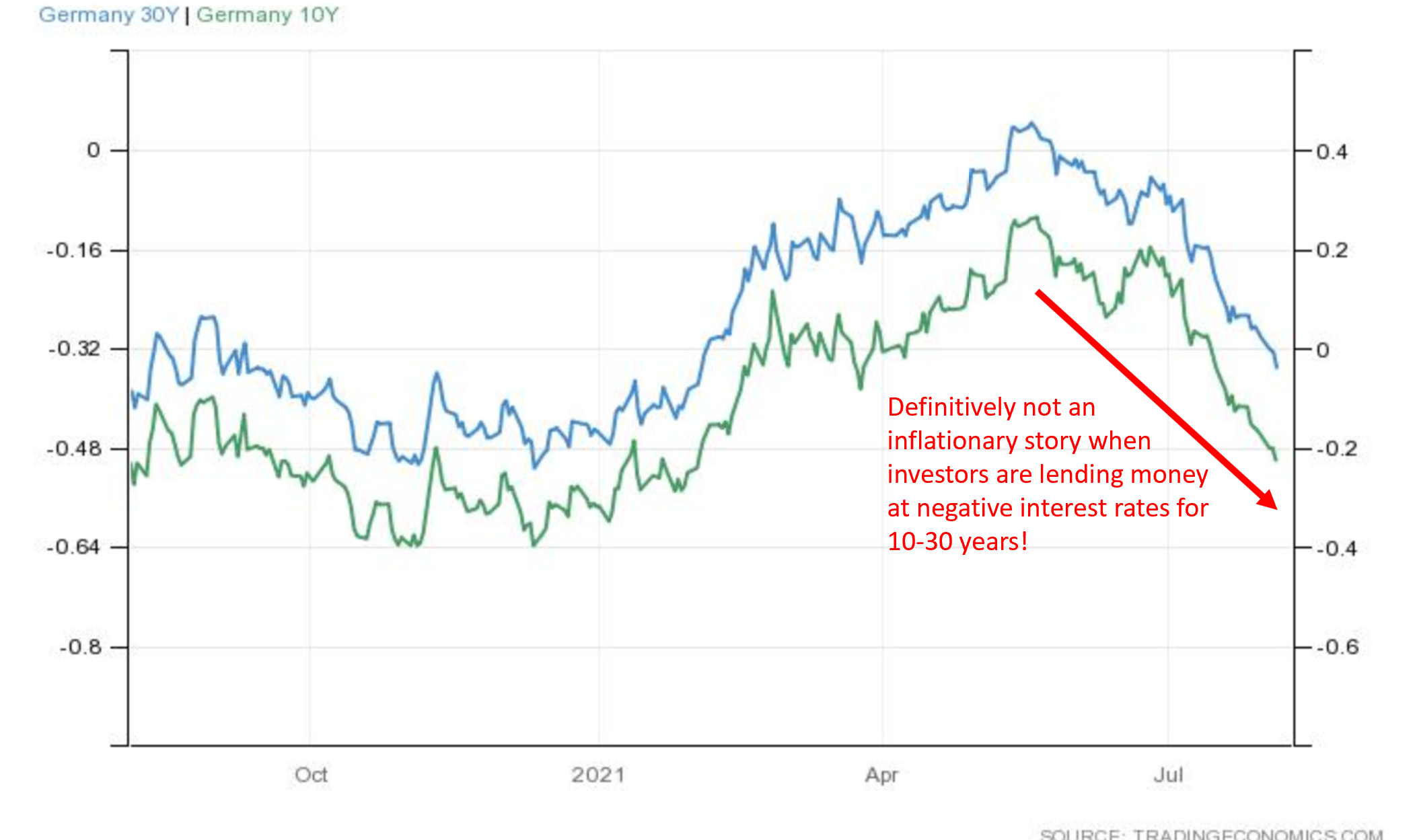 While stocks, commodities, and the government’s official price index are telling an inflationary story, the forward-looking bond markets of the world are saying the exact opposite. As bond yields trend lower, investors are sending a loud signal that the future is likely to have slower growth and credit contraction. This storyline isn’t getting a lot of airtime right now, because it would imply the economists at the TVA aren’t in control of the story. And that’s a problem for the confidence game they play. But like an alligator Loki, some characters just need a storyline.

The Importance of the Storyline

Rising prices are, according to mainstream economists, a good sign of economic growth. The recent rise in the CPI and some other prices appear to support what the mainstream wants to believe about the economy. Namely, that if they just print and spend enough dollars, the sacred timeline will remain intact.

This isn’t actually true for a variety of reasons. Fundamentally speaking, it fails to distinguish between economic growth and credit growth. Inflation might be an indication of credit growth, which some economists conflate with good, long-term, economic growth. And while it’s true that those two things sometimes occur side by side in a capitalistic economy, they are by no means the same thing. Like a stretched rubber band, credit growth can contract just as quickly as it expands. Long-term economic wealth is much more resilient, however, and tends to increase or decrease slowly (save for in times of war, which destroys it rather quickly).

For credit growth to be sustainable, it needs to be profitable. But as the Austrian school of economic analysis has pointed out for generations, when central banks print money in order to encourage credit expansion, that new credit rarely expands into areas that are profitable. As a result, massive credit expansion (the “boom” phase) leads to an inevitable massive credit contraction when investment projects begin to fail. At this later stage of the business cycle (the “bust” phase), the prior inflationary drivers actually become deflationary. The trend is towards lower prices because wealth has wasted away, which results in less demand for goods and services and less credit availability.

Our TVA-like overlords want us to believe that they “fixed” the economy. Their reckless spending over the past 16 months has performed an economic miracle. In fact, over the past 12 years every time the economy begins to deviate from ever more debt and credit expansion, the TVA has jumped in to juice the credit markets and restore the debt-inflated timeline.  A quick glance at the recent inflation numbers and the rising stock market can be quite convincing. The problem, however, is that just like a good Loki the bond market continues to emerge as a pesky variant. And this time, it is once again telling an alternative, less inflationary story.

There are other possible reasons for the recent surge in prices, such as Uncle Sam’s stimmy checks or supply-chain disruptions resulting from lockdowns, infrastructure failures, natural disasters, etc. Several things have occurred as of late to explain a temporary rise in prices. Bond markets, however, are not buying any sort of permanent trend in price increases. While the bond market certainly could be wrong this time, it has a much better track record than stocks in predicting the trajectory of the economy. When yields drop, lenders are getting concerned about future growth expectations. I suggest you pay attention to the variant in the bond market, not those at the TVA who are desperately trying to maintain the sacred timeline. At some point, they’re going to lose control. At some point, the variant will become the story.