The Very Definition Of It

“Credit expansion cannot increase the supply of real goods. It merely brings about a rearrangement. It diverts capital investment away from the course prescribed by the state of economic wealth and market conditions. It causes production to pursue paths which it would not follow unless the economy were to acquire an increase in material goods. As a result, the upswing lacks a solid base. It is not real prosperity. It is illusory prosperity. It did not develop from an increase in economic wealth. Rather, it arose because the credit expansion created the illusion of such an increase. Sooner or later it must become apparent that this economic situation is built on sand.” Ludwig Von Mises, in a speech entitled ‘The Causes of the Economic Crisis’, 1931

Sadly, the cause of that economic crisis (i.e. The Great Depression) will be the same as the next one. And probably the one after that, as well. “That’s crazy!” you say. Yes, it’s the very definition of it.

In 1931, nearly three thousand banks went belly up and the US economy contracted over 8%. In February of that year, Ludwig Von Mises – a well-respected scholar and economist – spoke to a group of German industrialists describing the causes of the economic crisis. His main thesis is that interventionist policies are largely to blame:

The capitalistic social order acquires meaning and purpose through the market. Hampering the functions of the market and the formation of prices does not create order. Instead it leads to chaos, to economic crisis.

At it’s most fundamental level, the health of an economy depends on how accurately information travels. The amount of “real goods” is a fact of reality that determines the direction of capital investment, interest rates, prices, etc. Like the amount of oxygen in a room or the distance of a mile, certain facts are not subject to bureaucratic approval. Mises’ point is that when governments intervene in free-market activity, they are attempting to change facts. But far from them actually changing reality, they simply convey inaccurate information. It’s like Congress declaring that a foot is now 13 inches long. Interventionist policies hamper economic growth because they distort the truth of the current economic reality. This distortion leads to the misallocation of capital, thereby creating booms and, subsequently, busts.

The boom, and then the…uh-oh

Mises’ short explanation above is exactly what we have seen in the rising prices of US real estate, bonds, and especially stocks over the past 10 years. High government deficits combined with Fed-induced ultra-low interest rates have allowed trillions of newly created credit to flow into these assets classes. This has provided an ‘upswing’ without the solid base of real goods to support it. 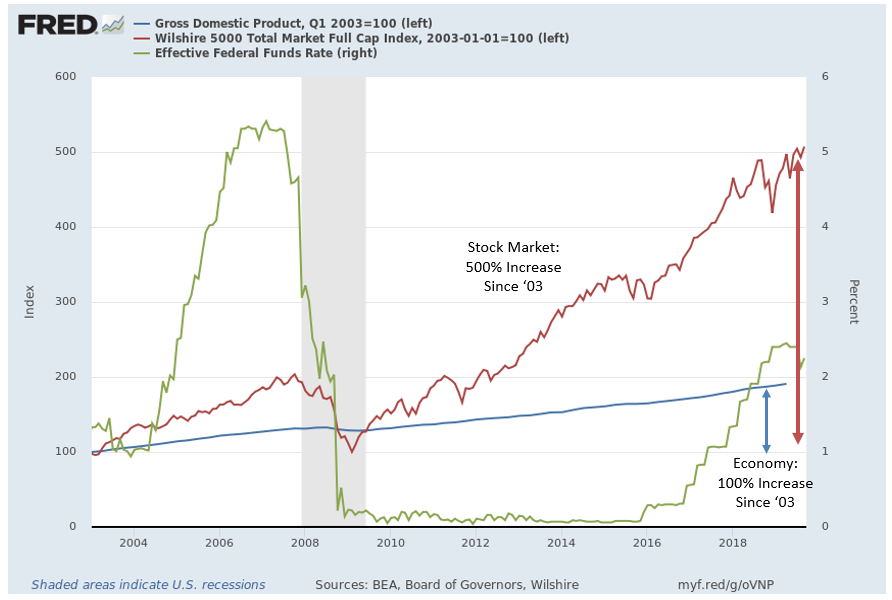 Since 2003, the difference between broad economic growth (the blue line) and stock market appreciation (the red line) has led to the highest level ever recorded on the “Buffett Indicator”. This metric shows the total value of the stock market compared to the economy as a whole. In short, it tells us whether stock prices are high or low at any given time. Today, they are more expensive than at the height of the Credit Crisis in ’07 or the Tech Bubble in ’00. 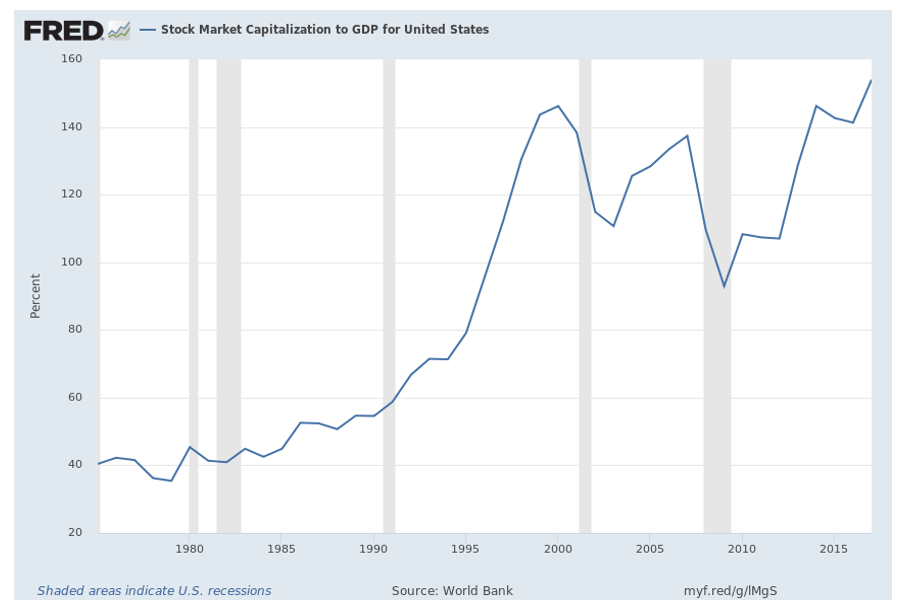 Warning signs are mounting that a recession is approaching. As a result, the question of what should be done is again coming to the fore. Unfortunately, to suggest “nothing” should be done is to ensure no one listens to you. After a century of booms and busts – as Mises predicted – the prevailing paradigm is essentially the same. Government intervention via ‘stimulus’, along with the artificial increase of debt through interest rate manipulation, is still the go-to solution. The only discussion ongoing right now is over what type of manipulation should be done.

It’s important to note that the highly-publicized conflict between President Trump and the Fed is one of degree, not kind. As long as the argument is about how much poison to swallow – and not over the foolishness of swallowing any – the booms and busts will not stop. Thus Mises states:

The appearance of periodically recurring economic crises is the necessary consequence of repeatedly renewed attempts to reduce the “natural” rates of interest on the market by means of banking policy. The crises will never disappear so long as men have not learned to avoid such pump-priming, because an artificially stimulated boom must inevitably lead to crisis and depression.

Today, every major economy in the world is “pump-priming” in an effort to (ironically) avoid a crisis. And this is where the definition of insanity meets its kryptonite. We all know that “if at first you don’t succeed, try try again!”

But something must be done!

And that something is a big fat nothing. As they say, “Don’t just do something, stand there!”. Mises concludes:

All attempts to emerge from the crisis by new interventionist measures are completely misguided. There is only one way out of the crisis: Forgo every attempt to prevent the impact of market prices on production. Give up the pursuit of policies which seek to establish interest rates, wage rates and commodity prices different from those the market indicates. This may contradict the prevailing view. It certainly is not popular. Today all governments and political parties have full confidence in interventionism and it is not likely that they will abandon their program.

Mises gave this speech nearly 100 years ago. It could have been given last week, although no one would have listened. We were all too busy listening to the government tell us what they are going to do next.

Thankfully, technology is accelerating the dissemination of accurate economic information, despite attempts by governments to publish “fake news”. When combined with a solid investment philosophy, investors can and will still make money in the future. Besides that, the future is full of opportunities, not least of which include the possibility of interventionists getting the boot. I’ll leave you with a silver lining from Mises’ conclusion:

It is perhaps not too optimistic to assume that those governments and parties whose policies have led to this crisis will some day disappear from the stage and make way for men whose economic program leads, not to destruction and chaos, but to economic development and progress.

After 100 years of this insanity, I’m not sure I share the same level of optimism for public policy changes. At least not in the short term. But one can always hope.