“The only rule that ever made sense to me I learned from a history, not an economics, professor at Wharton. “Fear,” he used to say, “fear is the most valuable commodity in the universe.” That blew me away. “Turn on the TV,” he’d say. “What are you seeing? People selling their products? No. People selling the fear of you having to live without their products.” …. Fear of aging, fear of loneliness, fear of poverty, fear of failure… is the most basic emotion we have. Fear is primal.”

Often. Maybe almost always. But always? Not necessarily. To illustrate, I’d like to talk about zombies of the corporate variety.

It’s that time of year again. The leaves are turning and dropping, nights are getting longer and colder, and zombies are once again lining the streets to wave at passersby. But after Halloween, the undead are boxed up as Thanksgiving and Christmas approach.

Unfortunately, zombies in the corporate world are becoming something of a year-long staple. Year after year, corporate zombies don’t go away after Halloween. In fact, every time the economic situation gets a little scary, new stimulus packages are served up by global central banks. It’s an “always Christmas but never winter” environment for corporate zombies. Cheap debt is the lifeblood (so to speak) of zombies, who not only fail to produce value but actually consume the real capital of an economy.

As we have discussed in prior years, zombie companies can be identified in several ways. One of the most common – the interest coverage ratio – identifies a zombie by its inability to pay the interest on its debt with its earnings before interest and taxes (EBIT). When a company maintains an interest coverage ratio of below one (i.e., its earnings cannot pay the interest on its debt) for more than a couple of years, it is often considered a zombie. Other indications of zombie status are persistently negative profits or low stock market valuations, both of which are deeply troubling signs of corporate health.

Zombification – a reason to fear?

As economies across the globe become more addicted to debt, corporations heavily dependent upon it have continued to increase. These companies have stayed in business longer than they should, continuing to crowd out productive investments that could have occurred in other, more profitable companies, had they been afforded the opportunity.

As I mentioned two years ago, in a 2018 report the Bank for International Settlements estimated that zombie companies made up approximately 12% of the corporate sector. Well, just in time for Halloween this year, the BIS released a revised 2020 report, indicating that zombies have a higher fertility rate than most of the western world. According to the BIS’s recent estimate zombie companies made up closer to 15% of the corporate sector in 2017, having increased significantly from around 4% in the 1980s. 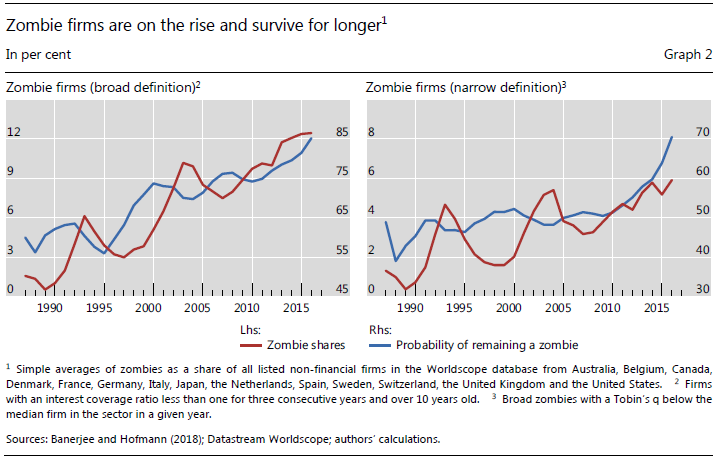 Importantly, the data in this report pre-dates the 2020 pandemic, along with its various lockdowns and massive government debt (ahem)… “stimulus” programs. Surely, the last 18 months haven’t been kind to the corporate sector of the developed world. In fact, earlier this year 19% of the Russell 3000 – a snapshot of US growth stocks – qualified for zombie status based on a 12-month interest coverage ratio.

But it gets even worse. According to major investment firm GMO, through the end of September of this year, nearly two-thirds of the companies listed on the Russell 3000 don’t make money. Forget about paying back interest on the debt!

Fundamentally, US corporations (along with much of the rest of the world) are increasingly more indebted and less productive. These companies depend heavily upon cheap credit to maintain increasing debt loads and lower productivity. This is a poor recipe for future economic success if history (and logic) is any indication.

Government Stimulus – a reason to fear missing out?

This might typically induce fear if it weren’t for the current narrative that government money printing will solve all our problems. As John Maynard Keynes infamously said, government stimulus is like “turning stones into bread”. How’s that for a messianic complex! An economic situation that might ordinarily induce fear in the hearts of investors has, instead, produced the opposite. And as Max Brooks argues, FOMO is simply the other side of the coin everyone is chasing. It doesn’t matter if that coin is physical or digital.

As GMO’s chart above intimates with its title “Making Money On Companies That Make No Money”, what is driving a lot of asset prices today is not fear, per se, but the fear of missing out on record asset prices. Just as the percentage of Russell 3000 companies who aren’t making any money sets a new record, these same asset prices are also setting new records as investors pile in. In fact, the Russell 3000 (RAG) index has more than doubled since last March.

Paying higher prices for less profitable businesses is one of the best indications that FOMO has taken over.

Our most natural inclination may be towards fear or FOMO. Brooks certainly thinks so. But are our motivations destined to vacillate between fear and greed? Are asset markets nothing more than imperfect reflections of the human condition, rising during times of FOMO and dropping like a rock during times of fear? I disagree.

If the discussion about the pandemic of corporate zombies can teach us anything, it’s that we can be aware of the dangers without being eaten by them. We might be tempted to be fearful of poor economic conditions. Greed might be pulling us towards risky investments because of misplaced trust in government mirages. But neither impulse is our fate.

Corporate zombies are increasing in number, but not all businesses are zombies. Many businesses continue to produce goods and services people want to buy. And they do so at costs that make them a profit while they do it. The key to exiting the fear/greed vortex is to reject both inclinations. Our motivations must be grounded in something other than fear, or FOMO. As King Solomon wrote long ago “wisdom is better than rubies, and all the things that may be desired are not to be compared to it.” “Wisdom”, he continues, “dwell[s] with prudence” (Prov. 8:11-12).

As one of Shakespeare’s characters once quipped “The better part of Valour; is Discretion”. Granted, the character uttering those words was a coward. I understand the irony. However, in times when many confuse recklessness and irrationality with courage, discretion may well be the better part.

Discretion, prudence, wisdom. Investing through turbulent times requires more than a hunger for big gains or the fear of huge losses. Warren Buffett is famous for suggesting investors be fearful when everyone is greedy, and greedy when everyone is fearful. On the face of it, this might seem to agree with Brooks about the nature of humanity. We only have two choices, after all; fear, or FOMO.

However, I think Buffett is encouraging us to reject both. One aspect of wisdom is looking forward to what consequences are in store for actions that have already been taken and may well be taken shortly. It requires the bearing of uncertainty in a world of constant change. This is part and parcel of the entrepreneurial spirit and American ingenuity. One that is neither cowardly nor reckless.

Hard work, due diligence, diversification. This is Buffett’s model. And these concepts aren’t driven by cowardice or greed, but by wisdom. Solomon wasn’t wrong when he said “Cast your bread upon the waters…In the morning sow your seed, And in the evening do not withhold your hand; For you do not know which will prosper, Either this or that, or whether both alike will be good” (Eccl. 11:1-6).