As we near the end of 2016, there may be an opportunity to reduce your income taxes if you act before the end of the year.  The election of Mr. Trump will likely result in significant changes to the income tax code.  Specifically, President-elect Trump and influential Republicans in Congress plan to eliminate certain tax benefits and decrease tax rates.  These changes are projected to provide tax relief for the mass affluent, as well as middle-class Americans.  However, it will affect individual taxpayers differently.  Moreover, the sudden change year-to-year will provide significant timing opportunities.  In this report, we provide a handful of simple steps which can reduce your tax burden.

With the recent election of Donald Trump as the 45th President of the United States, there will now likely be major changes to both the estate and income tax laws.  With Republicans maintaining a majority in the Senate and the House of Representatives, significant tax reform is more likely now than it has been in recent years.  It seems clear that the desired reforms are likely to:

Because the chances of passing legislation are more favorable when a President first takes office, and because much of the groundwork has already been laid with the Tax Reform Task Force Blueprint created by House Republicans in June 2016, new tax legislation will probably be introduced early in Trump’s presidential term.  Below is a summary of some of the more important proposals: 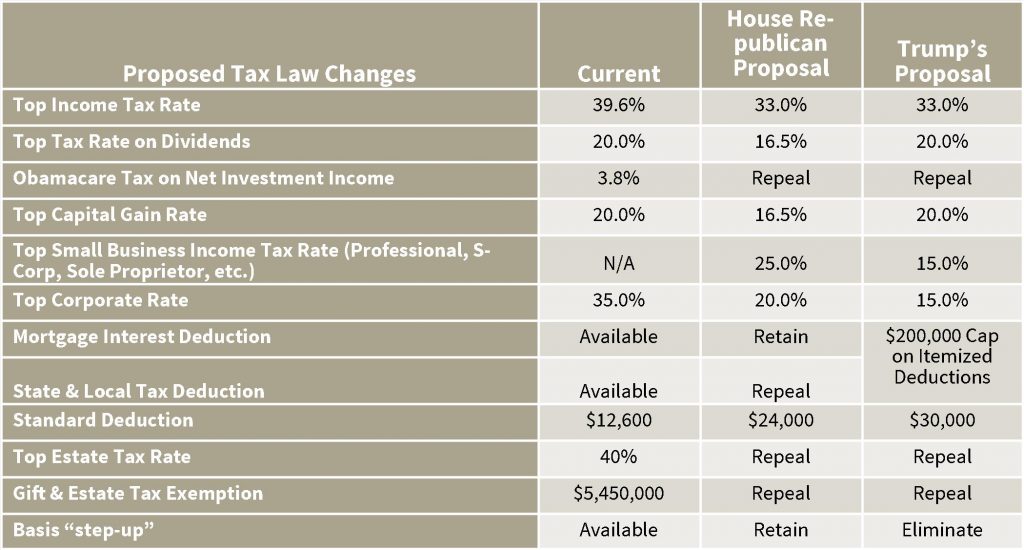 Trump’s plan differs in some respects from House Republicans’ Tax Reform Task Force Blueprint, but the two plans are in fundamental agreement on big-picture issues.  Both plans would simplify tax brackets, lower tax rates, and eliminate the alternative minimum tax, estate tax, and the 3.8% net investment income tax (NIIT).  This ideological agreement between the White House and Congress should facilitate tax reform in 2017.

Since it’s likely that the tax code will be simplified from 7 brackets to 3 brackets as illustrated in the chart below, what were likely to be seeing for many people is to defer income recognition events into next year and accelerate deductions, including large charitable planning, over the next few weeks.

Estate tax repeal has long been a Republican priority, and chances of success are perhaps greater now than ever.  Both the House Republican plan and the Trump plan are in conceptual agreement that the estate tax should be repealed.

While the House Republican plan is short on detail, it proposes simply to “eliminate the estate tax and the generation-skipping transfer tax, so that the death of a family member or loved one no longer will be a taxable event.”  There is notably no mention of how repeal of the estate tax could affect the current basis step-up for property acquired from a decedent.

Any tax reform is likely to affect the individual income tax brackets.  Given the potential for lower income taxes in 2017, many clients should consider deferring any income (including capital gains harvesting) until next year.  Deferring income and capital gain recognition gives you the ability to benefit from any future reduction in taxes.  Since it is almost certain that taxes will not increase in 2017, there is little downside to this wait-and-see approach.

Fortunately, there are a number of strategies you can use before the end of the year to defer recognizing income and accelerating deductions.

Of course, every situation is different, and many items of income or deduction cannot be controlled, but now is the time to look at your year-end tax situation.

Once the amount of taxable income is estimated, planning to avoid this year’s higher tax brackets and the NIIT can begin. There are many different specific tax planning strategies that can be implemented depending on the situation. Some of these include:

Watch out for Phase-outs

Despite their tax bracket decreasing considerably, the tax benefit of taking the deduction in 2017 is greater. 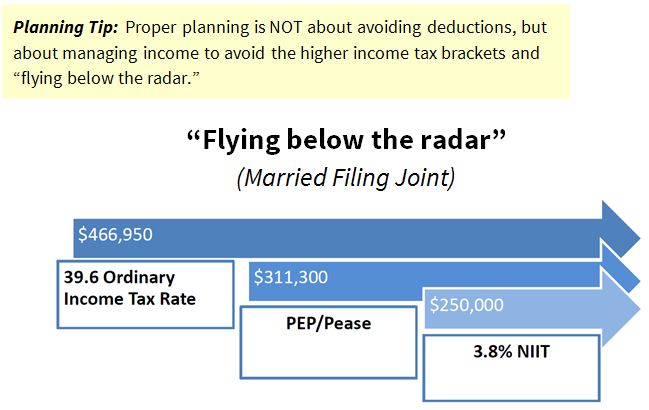 With the end of 2016 fast approaching, now is the time to find out if one or more of these strategies might help you save on your income tax this year.

Taxes are the biggest drag on investment performance.  Over a long period of time, “tax drag” can have a dramatic effect on wealth accumulation.  There’s an axiom in investing that says, “It’s not what you make, it’s what you keep.”  In other words, don’t allow your hard-earned investment gains to get eaten up by taxes.  The chart below shows just how damaging taxes can be.

Look at the top line in the graph. A $100,000 portfolio invested in 60% stocks and 40% bonds in 1979 would have grown to almost $4 million before taxes by 2015.  However, with no efforts to mitigate the tax effect, Uncle Sam would have eaten almost 60 percent of the gain, lowering the investor’s wealth to just a little more than $1.6 million. * 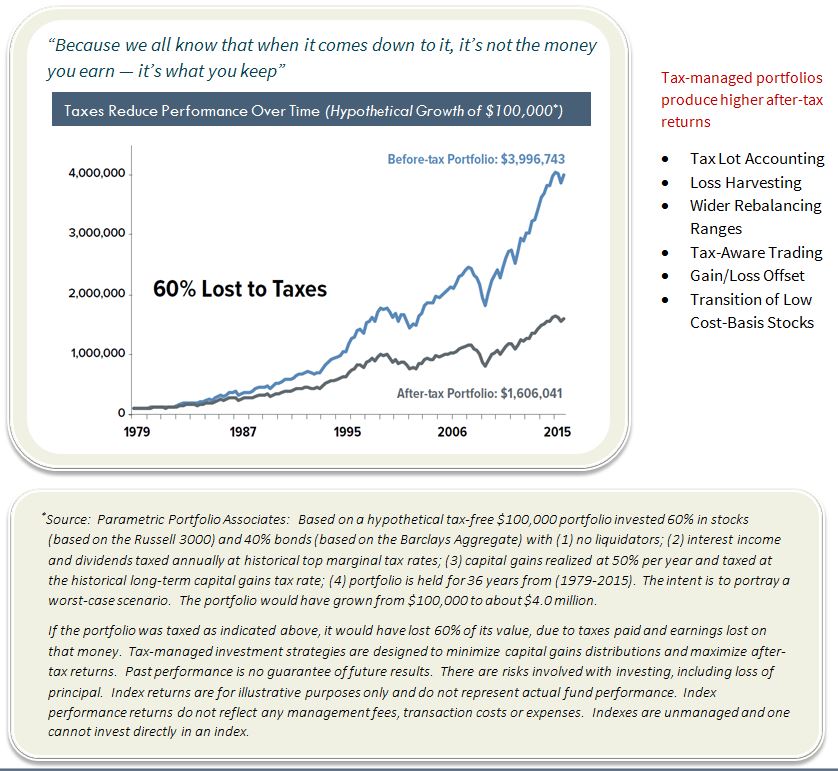 Many irrevocable trusts could be amended to better accomplish the objectives of the grantor and increase the benefit to beneficiaries.  The simplest and least expensive way to do so is by decanting the old trust into a new one.  Instead of exercising its power to make distributions to, or for the benefit of beneficiaries, the trustee distributes assets to a new trust with different terms.

Trust decanting can be used to address a variety of trust Issues. Some of the most popular reasons for decanting a trust are discussed below. Before utilizing any of the strategies, advisors should consider any tax issues that might be raised.  Although the subject is beyond the scope of this topic, the fiduciary responsibilities of the trustees must also be considered.

Whether planners should go ahead with decanting may depend on the type of decanting they wish to do. Commentators have suggested that if the decanting changes only administrative provisions, there is little risk even though it is not possible to get a PLR on the tax consequences.  If the decanting changes distributions or lengthens the term of the trust, however, a number of unfavorable tax consequences are possible and practitioners should proceed with caution.

It is important to review any law changes affecting powers of attorney. These changes are especially relevant in the estate planning context, as they affect an agent’s ability to assist the principal with estate planning transactions.  Existing documents should be reviewed carefully to ensure that the provisions remain appropriate.

As always, we recommend a review of your estate plan whenever there is a significant change in your family situation, your financial circumstance, or the tax law. We also continue to recommend the periodic review of all of your estate planning documents, including your living wills, health care proxies, powers of attorney, and beneficiary designations for life insurance policies and retirement plans. This is especially important if you are recently divorced, married, or re-married.

Periodic reviews of life insurance policies are also recommended to:

We hope you find this information helpful. If you have any questions about any of these concepts or developments discussed in this letter, we suggest that you discuss your specific tax issues with your tax and legal advisor.

IRS CIRCULAR 230 DISCLOSURE:  To comply with IRS Regulations, we inform you that any discussion of U.S. federal tax issues in this correspondence (including any enclosures) is not intended or written to be used, and cannot be used, (i) to avoid any penalties imposed under the Internal Revenue Code, or (ii) to promote, market, or recommend to another party any transaction or matter addressed herein.

© 2016 Plan Life & Wealth Management, Inc.   All rights reserved. Plan Financial, a company of Plan Life & Wealth, was founded in 1985, and serves a wide variety of clients – including corporations, trusts, charitable organizations, and individuals.